Pathogens protection against the action of disinfectants in multispecies biofilms 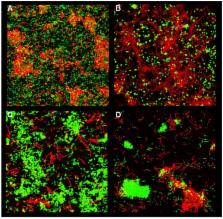 Biofilms constitute the prevalent way of life for microorganisms in both natural and man-made environments. Biofilm-dwelling cells display greater tolerance to antimicrobial agents than those that are free-living, and the mechanisms by which this occurs have been investigated extensively using single-strain axenic models. However, there is growing evidence that interspecies interactions may profoundly alter the response of the community to such toxic exposure. In this paper, we propose an overview of the studies dealing with multispecies biofilms resistance to biocides, with particular reference to the protection of pathogenic species by resident surface flora when subjected to disinfectants treatments. The mechanisms involved in such protection include interspecies signaling, interference between biocides molecules and public goods in the matrix, or the physiology and genetic plasticity associated with a structural spatial arrangement. After describing these different mechanisms, we will discuss the experimental methods available for their analysis in the context of complex multispecies biofilms.

Bacterial biofilms: from the natural environment to infectious diseases.

Luanne Hall-Stoodley,  J Costerton,  Paul Stoodley (2004)
Biofilms--matrix-enclosed microbial accretions that adhere to biological or non-biological surfaces--represent a significant and incompletely understood mode of growth for bacteria. Biofilm formation appears early in the fossil record (approximately 3.25 billion years ago) and is common throughout a diverse range of organisms in both the Archaea and Bacteria lineages, including the 'living fossils' in the most deeply dividing branches of the phylogenetic tree. It is evident that biofilm formation is an ancient and integral component of the prokaryotic life cycle, and is a key factor for survival in diverse environments. Recent advances show that biofilms are structurally complex, dynamic systems with attributes of both primordial multicellular organisms and multifaceted ecosystems. Biofilm formation represents a protected mode of growth that allows cells to survive in hostile environments and also disperse to colonize new niches. The implications of these survival and propagative mechanisms in the context of both the natural environment and infectious diseases are discussed in this review.

Bonnie Bassler,  Richard Miller,  Bruce Miller (2000)
Quorum sensing is the regulation of gene expression in response to fluctuations in cell-population density. Quorum sensing bacteria produce and release chemical signal molecules called autoinducers that increase in concentration as a function of cell density. The detection of a minimal threshold stimulatory concentration of an autoinducer leads to an alteration in gene expression. Gram-positive and Gram-negative bacteria use quorum sensing communication circuits to regulate a diverse array of physiological activities. These processes include symbiosis, virulence, competence, conjugation, antibiotic production, motility, sporulation, and biofilm formation. In general, Gram-negative bacteria use acylated homoserine lactones as autoinducers, and Gram-positive bacteria use processed oligo-peptides to communicate. Recent advances in the field indicate that cell-cell communication via autoinducers occurs both within and between bacterial species. Furthermore, there is mounting data suggesting that bacterial autoinducers elicit specific responses from host organisms. Although the nature of the chemical signals, the signal relay mechanisms, and the target genes controlled by bacterial quorum sensing systems differ, in every case the ability to communicate with one another allows bacteria to coordinate the gene expression, and therefore the behavior, of the entire community. Presumably, this process bestows upon bacteria some of the qualities of higher organisms. The evolution of quorum sensing systems in bacteria could, therefore, have been one of the early steps in the development of multicellularity.

J Costerton,  Z Lewandowski,  D E Caldwell … (1995)
Direct observations have clearly shown that biofilm bacteria predominate, numerically and metabolically, in virtually all nutrient-sufficient ecosystems. Therefore, these sessile organisms predominate in most of the environmental, industrial, and medical problems and processes of interest to microbiologists. If biofilm bacteria were simply planktonic cells that had adhered to a surface, this revelation would be unimportant, but they are demonstrably and profoundly different. We first noted that biofilm cells are at least 500 times more resistant to antibacterial agents. Now we have discovered that adhesion triggers the expression of a sigma factor that derepresses a large number of genes so that biofilm cells are clearly phenotypically distinct from their planktonic counterparts. Each biofilm bacterium lives in a customized microniche in a complex microbial community that has primitive homeostasis, a primitive circulatory system, and metabolic cooperativity, and each of these sessile cells reacts to its special environment so that it differs fundamentally from a planktonic cell of the same species.

This article was submitted to Food Microbiology, a section of the journal Frontiers in Microbiology