Brunner’s gland hyperplasia: an unusual cause of hemorrhagic shock 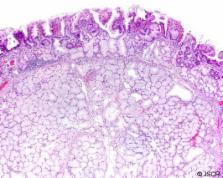 K. Wang,  Lawrence J Burgart,  A. Levine … (1995)
The aim of this study was to characterize the clinical presentation, pathological features, and outcome of a series of patients with Brunner's gland hamartomas. We reviewed the clinical and pathological features of 27 patients who presented with Brunner's gland hamartomas, and we obtained follow-up information. Patients (12 men and 15 women) presented predominantly in the fifth and sixth decades of life either with gastrointestinal hemorrhage (n = 10) or obstructive symptoms (n = 10); there were also patients whose tumors were discovered as an incidental finding (n = 7). The tumors were generally pedunculated, were located in the first portion of the duodenum, and were in the range of diameter from 1 to 6 cm. Histologically, the hamartomas were characterized by the presence of nondysplastic, lobulated Brunner's glands with intervening bands of fibrous tissue and variable adipose and lymphoid tissue. Focal sclerosis was found in 93% of the hamartomas, possibly mimicking an adenocarcinoma. Whether managed surgically (24 patients) or endoscopically (three patients), the outcome was uniformly favorable. After a median period of 7-yr-follow-up, no tumors recurred, and no additional morbidity was identified. Brunner's gland hamartomas are rare duodenal tumors occurring in middle age that present either with gastrointestinal hemorrhage, obstructive symptoms, or as an incidental finding. Surgical or endoscopic excision is uncomplicated, and the long-term outcome is favorable.