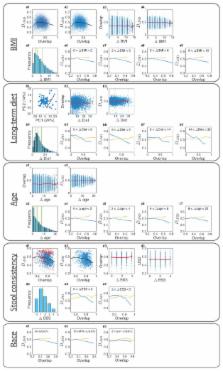 The recent realization that human-associated microbial communities play a crucial role in determining our health and well-being 1, 2 has led to the ongoing development of microbiome-based therapies 3 such as fecal microbiota transplantation 4, 5 . Thosemicrobial communities are very complex, dynamic 6 and highly personalized ecosystems 3, 7 , exhibiting a high degree of inter-individual variability in both species assemblages 8 and abundance profiles 9 . It is not known whether the underlying ecological dynamics, which can be parameterized by growth rates, intra- and inter-species interactions in population dynamics models 10 , are largely host-independent (i.e. “universal”) or host-specific. If the inter-individual variability reflects host-specific dynamics due to differences in host lifestyle 11 , physiology 12 , or genetics 13 , then generic microbiome manipulations may have unintended consequences, rendering them ineffectual or even detrimental. Alternatively, microbial ecosystems of different subjects may follow a universal dynamics with the inter-individual variability mainly stemming from differences in the sets of colonizing species 7, 14 . Here we developed a novel computational method to characterize human microbial dynamics. Applying this method to cross-sectional data from two large-scale metagenomic studies, the Human Microbiome Project 9, 15 and the Student Microbiome Project 16 , we found that both gut and mouth microbiomes display pronounced universal dynamics, whereas communities associated with certain skin sites are likely shaped by differences in the host environment. Interestingly, the universality of gut microbial dynamics is not observed in subjects with recurrent Clostridium difficile infection 17 but is observed in the same set of subjects after fecal microbiota transplantation. These results fundamentally improve our understanding of forces and processes shaping human microbial ecosystems, paving the way to design general microbiome-based therapies 18 .

Ruth E Ley,  Jens Walter (2010)
The human gastrointestinal tract is divided into sections, allowing digestion and nutrient absorption in the proximal region to be separate from the vast microbial populations in the large intestine, thereby reducing conflict between host and microbes. In the distinct habitats of the gut, environmental filtering and competitive exclusion between microbes are the driving factors shaping microbial diversity, and stochastic factors during colonization history and in situ evolution are likely to introduce intersubject variability. Adaptive strategies of microbes with different niches are genomically encoded: Specialists have smaller genomes than generalists, and microbes with environmental reservoirs have large accessory genomes. A shift toward a Neolithic diet increased loads of simple carbohydrates and selected for their increased breakdown and absorption in the small intestine. Humans who outcompeted microbes for the new substrates obtained more energy from their diets and prospered, an evolutionary process reflected in modern population genetics. The three-way interactions between human genetics, diet, and the microbiota fundamentally shaped modern populations and continue to affect health globally.

Thomas J. Borody,  Alexander Khoruts (2012)
Fecal microbiota transplantation (FMT) has been utilized sporadically for over 50 years. In the past few years, Clostridium difficile infection (CDI) epidemics in the USA and Europe have resulted in the increased use of FMT, given its high efficacy in eradicating CDI and associated symptoms. As more patients request treatment and more clinics incorporate FMT into their treatment repertoire, reports of applications outside of CDI are emerging, paving the way for the use of FMT in several idiopathic conditions. Interest in this therapy has largely been driven by new research into the gut microbiota, which is now beginning to be appreciated as a microbial human organ with important roles in immunity and energy metabolism. This new paradigm raises the possibility that many diseases result, at least partially, from microbiota-related dysfunction. This understanding invites the investigation of FMT for several disorders, including IBD, IBS, the metabolic syndrome, neurodevelopmental disorders, autoimmune diseases and allergic diseases, among others. The field of microbiota-related disorders is currently in its infancy; it certainly is an exciting time in the burgeoning science of FMT and we expect to see new and previously unexpected applications in the near future. Well-designed and well-executed randomized trials are now needed to further define these microbiota-related conditions.

R. Levy,  E Borenstein (2013)
The human microbiome plays a key role in human health and is associated with numerous diseases. Metagenomic-based studies are now generating valuable information about the composition of the microbiome in health and in disease, demonstrating nonneutral assembly processes and complex co-occurrence patterns. However, the underlying ecological forces that structure the microbiome are still unclear. Specifically, compositional studies alone with no information about mechanisms of interaction, potential competition, or syntrophy, cannot clearly distinguish habitat-filtering and species assortment assembly processes. To address this challenge, we introduce a computational framework, integrating metagenomic-based compositional data with genome-scale metabolic modeling of species interaction. We use in silico metabolic network models to predict levels of competition and complementarity among 154 microbiome species and compare predicted interaction measures to species co-occurrence. Applying this approach to two large-scale datasets describing the composition of the gut microbiome, we find that species tend to co-occur across individuals more frequently with species with which they strongly compete, suggesting that microbiome assembly is dominated by habitat filtering. Moreover, species' partners and excluders exhibit distinct metabolic interaction levels. Importantly, we show that these trends cannot be explained by phylogeny alone and hold across multiple taxonomic levels. Interestingly, controlling for host health does not change the observed patterns, indicating that the axes along which species are filtered are not fully defined by macroecological host states. The approach presented here lays the foundation for a reverse-ecology framework for addressing key questions concerning the assembly of host-associated communities and for informing clinical efforts to manipulate the microbiome.