Pacemaker-induced tachycardia in a DDI-programmed ICD: What is the mechanism? 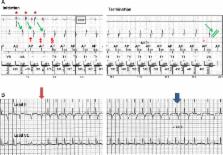 ScienceOpenPublisherPMC
Bookmark
There is no author summary for this article yet. Authors can add summaries to their articles on ScienceOpen to make them more accessible to a non-specialist audience.
Introduction Dual chamber pacing systems utilize different timing cycles to provide pacing support and coordination of atrioventricular synchrony. At times, this can result in unexpected pacing behavior. This case illustrates one such example. Case report A 64-year-old man with a history of nonischemic cardiomyopathy received a St. Jude Medical (Sylmar, CA) dual-chamber implantable cardioverter-defibrillator (ICD) in 2011. He had sick sinus syndrome with intact atrioventricular (AV) conduction. He was recently admitted to the hospital for treatment of pneumonia. His ICD was programmed to DDI pacing at 90 beats per minute (bpm) with a paced AV interval of 350 milliseconds. While on telemetry, the patient was noted to have nonsustained episodes of pacing-associated tachycardia at a rate of approximately 150 bpm. His ICD was interrogated and found to be functioning normally. Because a ventricular tachycardia monitor zone was programmed to 130 bpm, data from the tachycardia episode were stored. Review of the data revealed atrial pacing at a rate of approximately 150 bpm. What could be causing the device to pace at a rate faster than what was programmed? Discussion Dual-chamber pacing requires the coordination of timing cycles from both the atrium and the ventricle. Hence, a given pacing mode (eg, DDD, DDI, managed ventricular pacing) can operate predominantly based on atrial- or ventricular-based timing intervals. Whereas managed ventricular pacing and DDD pacing modes rely on modified atrial-based algorithms, DDI pacing mode uses ventricular-based timing cycles. 1 Hence, the cycle length between 2 atrial paced events is dictated not on the A-A interval but on the V-A interval. This feature is illustrated in Figure 1. The device was programmed to DDI 90 (approximately 662 milliseconds) with a programmed paced AV delay of 350 milliseconds. Hence, the calculated VA interval = 662 milliseconds −350 milliseconds, or 312 milliseconds. Rather than an AP-AP interval of 662 milliseconds, an interval of 609 milliseconds was observed, because the intrinsic conduction through the AV node was 297 milliseconds. With a fixed V-A interval of 312 milliseconds, this resulted in the next AP event to occur earlier, so that the AP-AP interval = 297 milliseconds +312 milliseconds, or 609 milliseconds. The nature of the ventricular-based timing cycle is also the reason for the episode of pacing-induced tachycardia. At the initiation of the tachycardia in Figure 2A, 3 premature atrial complexes (PACs) are noted (red asterisks). The first PAC conducts down the AV node after 230 milliseconds. The second PAC falls in the postventricular atrial refractory period of the conducted ventricular sensed (VS) event (no AS marker) and conducts down the AV node with more decrement. Because the second PAC fell in the postventricular atrial refractory period, the device delivers an AP event (†) 312 milliseconds after the VS event resulting from the first PAC. Coincidentally, this AP event (†) occurs 98 milliseconds prior to the VS event resulting from the second PAC (which is outside of the device’s postatrial ventricular blanking [PAVB] period of 65 milliseconds). Given the ventricular-based timing cycle, the device then delivers the next AP event (‡) 312 milliseconds after the VS event resulting from the second PAC. A third PAC then occurs, which also results in conduction down the AV node. The VS event resulting from the third PAC occurs 78 milliseconds after the AP event (‡) and triggers the next AP event (§) to occur 312 milliseconds afterward. The AP event (‡) conducts down the AV node at a timing interval that allows for the VS to occur just outside the PAVB and perpetuates the tachycardia as seen. Toward the end of the tachycardia, there are greater degrees of decremental conduction through the AV node such that the second-to-last AP event (red ↓) blocks in the AV node and allows the device to return to pacing at slower rates. This phenomenon was also nicely illustrated in the telemetry recordings obtained at the bedside (Figure 2B). Conclusions DDI is a ventricular-based pacing mode and the cycle length between 2 atrially paced events is dictated by the V-A interval. 1 With greater emphasis on minimizing right ventricular pacing, the programmed paced AV delay is often lengthened, thus resulting in a shorter V-A interval. When intrinsic conduction times through the AV node are faster than the programmed paced AV delay, the lower rate of pacing (ie, cycle length between 2 AP events) is necessarily faster than what is programmed. In this example, the VS events resulting from the 3 fortuitously timed PACs managed to occur just outside the PAVB of the preceding AP event, thus resulting in a form of “pacemaker-mediated tachycardia”. Unlike traditional pacemaker-mediated tachycardia (also known as “repetitive reentrant ventriculoatrial synchrony” 2 ), where tachycardia is mediated by ventricular pacing in response to atrial sensed events, the tachycardia in this example is mediated by atrial pacing in response to VS events. Hence, we have termed this phenomenon “repetitive reentrant atrioventricular synchrony”. In an effort to reduce the likelihood of this event, we reprogrammed the device to an atrially based pacing mode (eg, DDD). Other possible solutions to reduce the likelihood of repetitive reentrant atrioventricular synchrony include lengthening the PAVB interval (not available in this device), reducing the lower pacing rate and shortening the programmed paced AV interval.