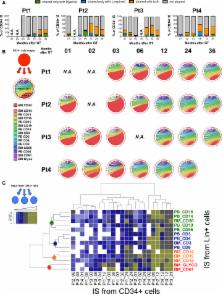 Hematopoietic stem/progenitor cells (HSPCs) are capable of supporting the lifelong production of blood cells exerting a wide spectrum of functions. Lentiviral vector HSPC gene therapy generates a human hematopoietic system stably marked at the clonal level by vector integration sites (ISs). Using IS analysis, we longitudinally tracked >89,000 clones from 15 distinct bone marrow and peripheral blood lineages purified up to 4 years after transplant in four Wiskott-Aldrich syndrome patients treated with HSPC gene therapy. We measured at the clonal level repopulating waves, populations' sizes and dynamics, activity of distinct HSPC subtypes, contribution of various progenitor classes during the early and late post-transplant phases, and hierarchical relationships among lineages. We discovered that in-vitro-manipulated HSPCs retain the ability to return to latency after transplant and can be physiologically reactivated, sustaining a stable hematopoietic output. This study constitutes in vivo comprehensive tracking in humans of hematopoietic clonal dynamics during the early and late post-transplant phases. 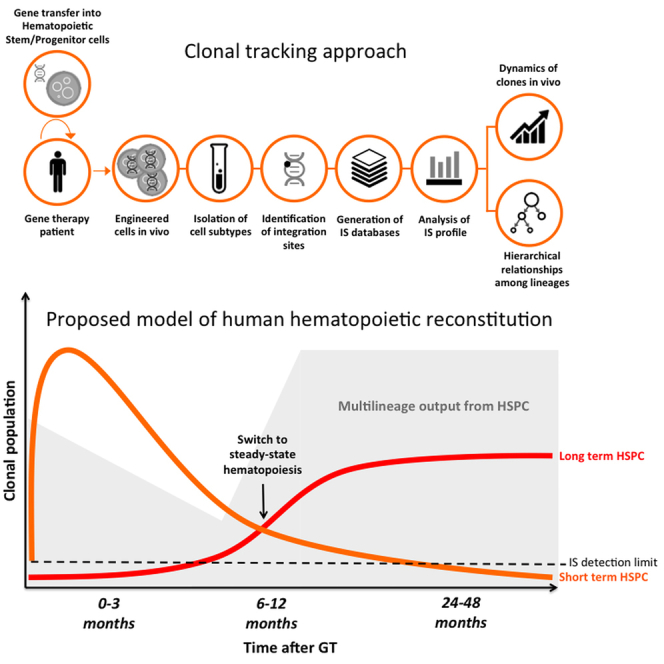 Biasco et al. report a clonal tracking study on the dynamics and nature of hematopoietic reconstitution in humans after transplant. Using integration sites as molecular tags, they measured, in gene therapy patients, repopulating waves, population size and dynamics, activity of progenitor subtypes during the early and late post-transplant phases, and hierarchical relationships among lineages.

Motonari Kondo,  Irving L Weissman,  Koichi Akashi (1997)
The existence of a common lymphoid progenitor that can only give rise to T cells, B cells, and natural killer (NK) cells remains controversial and constitutes an important gap in the hematopoietic lineage maps. Here, we report that the Lin(-)IL-7R(+)Thy-1(-)Sca-1loc-Kit(lo) population from adult mouse bone marrow possessed a rapid lymphoid-restricted (T, B, and NK) reconstitution capacity in vivo but completely lacked myeloid differentiation potential either in vivo or in vitro. A single Lin(-)IL-7R(+)Thy-1(-)Sca-1loc-Kit(lo) cell could generate at least both T and B cells. These data provide direct evidence for the existence of common lymphoid progenitors in sites of early hematopoiesis.

Jianlong Sun,  Azucena Ramos,  Brad Chapman … (2014)
It is currently thought that life-long blood cell production is driven by the action of a small number of multipotent haematopoietic stem cells. Evidence supporting this view has been largely acquired through the use of functional assays involving transplantation. However, whether these mechanisms also govern native non-transplant haematopoiesis is entirely unclear. Here we have established a novel experimental model in mice where cells can be uniquely and genetically labelled in situ to address this question. Using this approach, we have performed longitudinal analyses of clonal dynamics in adult mice that reveal unprecedented features of native haematopoiesis. In contrast to what occurs following transplantation, steady-state blood production is maintained by the successive recruitment of thousands of clones, each with a minimal contribution to mature progeny. Our results demonstrate that a large number of long-lived progenitors, rather than classically defined haematopoietic stem cells, are the main drivers of steady-state haematopoiesis during most of adulthood. Our results also have implications for understanding the cellular origin of haematopoietic disease.

Salima Hacein-Bey-Abina,  Anne Durandy,  Jean-Laurent Casanova … (2010)
The outcomes of gene therapy to correct congenital immunodeficiencies are unknown. We reviewed long-term outcomes after gene therapy in nine patients with X-linked severe combined immunodeficiency (SCID-X1), which is characterized by the absence of the cytokine receptor common gamma chain. The nine patients, who lacked an HLA-identical donor, underwent ex vivo retrovirus-mediated transfer of gamma chain to autologous CD34+ bone marrow cells between 1999 and 2002. We assessed clinical events and immune function on long-term follow-up. Eight patients were alive after a median follow-up period of 9 years (range, 8 to 11). Gene therapy was initially successful at correcting immune dysfunction in eight of the nine patients. However, acute leukemia developed in four patients, and one died. Transduced T cells were detected for up to 10.7 years after gene therapy. Seven patients, including the three survivors of leukemia, had sustained immune reconstitution; three patients required immunoglobulin-replacement therapy. Sustained thymopoiesis was established by the persistent presence of naive T cells, even after chemotherapy in three patients. The T-cell-receptor repertoire was diverse in all patients. Transduced B cells were not detected. Correction of the immunodeficiency improved the patients' health. After nearly 10 years of follow-up, gene therapy was shown to have corrected the immunodeficiency associated with SCID-X1. Gene therapy may be an option for patients who do not have an HLA-identical donor for hematopoietic stem-cell transplantation and for whom the risks are deemed acceptable. This treatment is associated with a risk of acute leukemia. (Funded by INSERM and others.) 2010 Massachusetts Medical Society