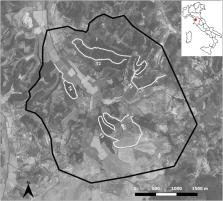 The Italian wolf population in human-modified landscapes has increased greatly in the last few decades. Anthropisation increases the risk of transmission of many zoonotic infections and in this context, control of taeniid cestode species needs to be addressed from a One Health perspective. Predator-prey interactions are at the root of taeniid cestode transmission, and the wolf plays a key role in the maintenance and transmission of taeniids. To date, all available data on the taeniids of wolves in Italy refer to populations living in a wild habitat. Between 2018 and 2019, we investigated taeniids in a wolf pack living in a highly anthropic hilly agro-ecosystem. Thirty-eight faecal samples were collected and analysed, 4 of which were also genetically characterised for individual wolves and belonged to three different animals. Samples collected were analysed microscopically and by molecular analysis in order to identify the taeniid species. Taeniid eggs were detected in 34.2% (13/38) of samples. Within samples positive to taeniid eggs only Echinococcus granulosus s.s. and Taenia hydatigena were identified in 26.3% and 10.5% of the samples, respectively. On microscopic examination, Capillaria spp., Ancylostomatidae and Toxocara canis eggs, Crenosoma vulpis larvae, and coccidian oocysts were also found. The combination of low biodiversity of taeniid species with a high occurrence of E. granulosus s.s. recorded in this study could be the consequence of a deeper link occurring between wolves and livestock in human-modified landscapes than in wild settings.

J. Bowles,  D. Blair,  D. McManus (1992)
The pattern of species and strain variation within the genus Echinococcus is complex and controversial. In an attempt to characterise objectively the various species and strains, the sequence of a region of the mitochondrial cytochrome c oxidase subunit I (CO1) gene was determined for 56 Echinococcus isolates. Eleven different genotypes were detected, including 7 within Echinococcus granulosus, and these were used to categorise the isolates. The 4 generally accepted Echinococcus species were clearly distinguishable using this approach. In addition, the consensus view of the strain pattern within E. granulosus, based on a variety of criteria of differentiation, was broadly upheld. Very little variation was detected within Echinococcus multilocularis. Remarkable intra-strain homogeneity was found at the DNA sequence level. This region of the rapidly evolving mitochondrial genome is useful as a marker of species and strain identity and as a preliminary indication of evolutionary divergence within the genus Echinococcus.

Large predators in the Alps: The fall and rise of man's competitors