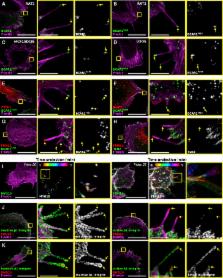 Filopodia are adhesive cellular protrusions specialized in the detection of extracellular matrix (ECM)-derived cues. Although ECM engagement at focal adhesions is known to trigger the recruitment of hundreds of proteins (“adhesome”) to fine-tune cellular behavior, the components of the filopodia adhesions remain undefined. Here, we performed a structured-illumination-microscopy-based screen to map the localization of 80 target proteins, linked to cell adhesion and migration, within myosin-X-induced filopodia. We demonstrate preferential enrichment of several adhesion proteins to either filopodia tips, filopodia shafts, or shaft subdomains, suggesting divergent, spatially restricted functions for these proteins. Moreover, proteins with phosphoinositide (PI) binding sites are particularly enriched in filopodia. This, together with the strong localization of PI(3,4)P 2 in filopodia tips, predicts critical roles for PIs in regulating filopodia ultra-structure and function. Our mapping further reveals that filopodia adhesions consist of a unique set of proteins, the filopodome, that are distinct from classical nascent adhesions, focal adhesions, and fibrillar adhesions. Using live imaging, we observe that filopodia adhesions can give rise to nascent adhesions, which, in turn, form focal adhesions. We demonstrate that p130Cas (BCAR1) is recruited to filopodia tips via its C-terminal Cas family homology domain (CCHD) and acts as a mechanosensitive regulator of filopodia stability. Finally, we demonstrate that our map based on myosin-X-induced filopodia can be translated to endogenous filopodia and fascin- and IRSp53-mediated filopodia.

Jacquemet et al. perform super-resolution imaging of filopodia and define a map of core and accessory components based on a pool of target proteins linked to cell adhesion. They show that filopodia adhesions are distinct from classical adhesions and nucleate nascent adhesions and are mechanosensitive, requiring phospho-p130Cas for stabilization.

Mechanical integration of actin and adhesion dynamics in cell migration.

Margaret L. Gardel, Ian Schneider, Yvonne Aratyn-Schaus … (2010)
Directed cell migration is a physical process that requires dramatic changes in cell shape and adhesion to the extracellular matrix. For efficient movement, these processes must be spatiotemporally coordinated. To a large degree, the morphological changes and physical forces that occur during migration are generated by a dynamic filamentous actin (F-actin) cytoskeleton. Adhesion is regulated by dynamic assemblies of structural and signaling proteins that couple the F-actin cytoskeleton to the extracellular matrix. Here, we review current knowledge of the dynamic organization of the F-actin cytoskeleton in cell migration and the regulation of focal adhesion assembly and disassembly with an emphasis on how mechanical and biochemical signaling between these two systems regulate the coordination of physical processes in cell migration.

BoxPlotR: a web tool for generation of box plots.

Jean-Cheng Kuo, Xuemei Han, Cheng-Te Hsiao … (2011)
Focal adhesions (FAs) undergo myosinII-mediated maturation wherein they grow and change composition to modulate integrin signaling for cell migration, growth and differentiation. To determine how FA composition is modulated by myosinII activity, we performed proteomic analysis of isolated FAs and compared protein abundance in FAs from cells with and without myosinII inhibition. We identified FA 905 proteins, 459 of which changed in FA abundance with myosinII inhibition, defining the myosinII-responsive FA proteome. FA abundance of 73% of proteins was enhanced by contractility, including those involved in Rho-mediated FA maturation and endocytosis- and calpain-dependent FA disassembly. 27% of proteins, including those involved in Rac-mediated lamellipodial protrusion, were enriched in FA by myosinII inhibition, establishing for the first time negative regulation of FA protein recruitment by contractility. We focused on the Rac guanine nucleotide exchange factor, β-PIX, documenting its role in negative regulation of FA maturation and promotion of lamellipodial protrusion, FA turnover to drive cell migration.