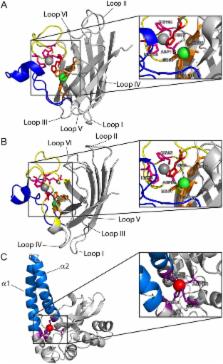 Oxidative stress is a particularly severe threat to Antarctic marine polar organisms because they are exposed to high dissolved oxygen and to intense UV radiation. This paper reports the features of three superoxide dismutases from the Antarctic psychrophilic ciliate Euplotes focardii that faces two environmental challenges, oxidative stress and low temperature. Two out of these are Cu,Zn superoxide dismutases (named Ef-SOD1a and Ef-SOD1b) and one belongs to the Mn-containing group ( Ef-SOD2). Ef-SOD1s and Ef-SOD2 differ in their evolutionary history, expression and overall structural features. Ef-SOD1 genes are expressed at different levels, with Ef-SOD1b mRNA 20-fold higher at the ciliate optimal temperature of growth (4 °C). All Ef-SOD enzymes are active at 4 °C, consistent with the definition of cold-adapted enzymes. At the same time, they display temperatures of melting in the range 50–70 °C and retain residual activity after incubation at 65–75 °C. Supported by data of molecular dynamics simulation, we conclude that the E. focardii SODs combine cold activity, local molecular flexibility and thermo tolerance.

S D'Amico,  Charles Gerday,  Georges Feller … (2006)
The ability of psychrophiles to survive and proliferate at low temperatures implies that they have overcome key barriers inherent to permanently cold environments. These challenges include: reduced enzyme activity; decreased membrane fluidity; altered transport of nutrients and waste products; decreased rates of transcription, translation and cell division; protein cold-denaturation; inappropriate protein folding; and intracellular ice formation. Cold-adapted organisms have successfully evolved features, genotypic and/or phenotypic, to surmount the negative effects of low temperatures and to enable growth in these extreme environments. In this review, we discuss the current knowledge of these adaptations as gained from extensive biochemical and biophysical studies and also from genomics and proteomics.

Diversity and ecology of psychrophilic microorganisms.

Rosa Margesin,  Yana V. Miteva (2011)
Cold environments represent the majority of the biosphere on Earth and have been successfully colonized by psychrophilic microorganisms that are able to thrive at low temperatures and to survive and even maintain metabolic activity at subzero temperatures. These microorganisms play key ecological roles in their habitats and include a wide diversity of representatives of all three domains (Bacteria, Archaea, Eukarya). In this review, we summarize recent knowledge on the abundance, on the taxonomic and functional biodiversity, on low temperature adaptation and on the biogeography of microbial communities in a range of aquatic and terrestrial cold environments. Copyright © 2010 Institut Pasteur. Published by Elsevier SAS. All rights reserved.