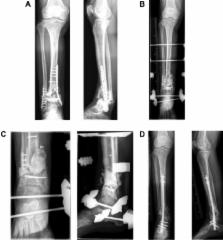 Impaired fracture healing, especially when associated with bacterial infection, is a severe complication following long-bone fractures and requires special treatment. Because standard diagnostic techniques might provide falsely negative results, we evaluated the sonication method for detection of bacteria on implants of patients with fracture nonunions. A total of 49 patients with a nonunion (group NU) and, for comparison, 45 patients who had undergone routine removal of osteosynthetic material (group OM), were included in the study. Five different diagnostic methods (culture of tissue samples, culture of intraoperative swabs, histopathology of tissue samples, culture of sonication fluid, and 16S ribosomal DNA polymerase chain reaction of sonication fluid) were compared and related to clinical data. Among the diagnostic tests, culture of sonication fluid demonstrated by far the highest detection rate of bacteria (57%) in group NU, and rather unexpectedly 40% in group OM. Culture of sonication samples also revealed a broad spectrum of bacteria, in particular Propionibacterium spp. In conclusion, our results indicate that more bacteria can be detected on implants of patients with atrophic nonunions of long-bone fractures by means of the sonication procedure, which provides a valuable additional diagnostic tool to decide on a surgical procedure (eg, two-step procedure) and to further specify antimicrobial therapy.

Sonication of removed hip and knee prostheses for diagnosis of infection.

Luanne Hall-Stoodley,  Paul Stoodley (2009)
Several pathogens associated with chronic infections, including Pseudomonas aeruginosa in cystic fibrosis pneumonia, Haemophilus influenzae and Streptococcus pneumoniae in chronic otitis media, Staphylococcus aureus in chronic rhinosinusitis and enteropathogenic Escherichia coli in recurrent urinary tract infections, are linked to biofilm formation. Biofilms are usually defined as surface-associated microbial communities, surrounded by an extracellular polymeric substance (EPS) matrix. Biofilm formation has been demonstrated for numerous pathogens and is clearly an important microbial survival strategy. However, outside of dental plaques, fewer reports have investigated biofilm development in clinical samples. Typically biofilms are found in chronic diseases that resist host immune responses and antibiotic treatment and these characteristics are often cited for the ability of bacteria to persist in vivo. This review examines some recent attempts to examine the biofilm phenotype in vivo and discusses the challenges and implications for defining a biofilm phenotype.