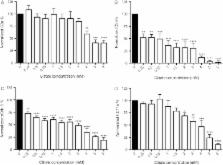 The effects of citrate and acetate were investigated in human whole blood in vitro under conditions promoting biomaterial-induced activation. Complement activation was measured as generation of C3a, C5a and the sC5b-9 complex, and granulocyte activation as up-regulation of CD11b expression. For the experimental set-up, a mathematical model was created to calculate the concentrations of acetate and citrate attained during haemodialysis.

Our results suggest that citrate is a promising substitute for acetate for a more biocompatible dialysis, most likely resulting in less adverse effects for the patients.

The role of complement in biomaterial-induced inflammation.

John Lambris,  Kristina Nilsson Ekdahl,  Tom Eirik Mollnes … (2007)
Biomaterials are regularly used in various types of artificial tissues and organs, such as oxygenators, plasmapheresis equipment, hemodialysers, catheters, prostheses, stents, vascular grafts, miniature pumps, sensors and heart aids. Although progress has been made regarding bioincompatibility, many materials and procedures are associated with side effects, in particular bioincompatibility-induced inflammation, infections and subsequent loss of function. After cardiopulmonary bypass, coagulopathies can occur and lead to cognitive disturbances, stroke and extended hospitalization. Hemodialysis is associated with anaphylatoid reactions that cause whole-body inflammation and may contribute to accelerated arteriosclerosis. Stents cause restenosis and, in severe cases, thrombotic reactions. This situation indicates that there is still a need to try to understand the mechanisms involved in these incompatibility reactions in order to be able to improve the biomaterials and to develop treatments that attenuate the reactions and thereby reduce patients' discomfort, treatment time and cost. This overview deals with the role of complement in the incompatibility reactions that occur when biomaterials come in contact with blood and other body fluids.

Quantification of the terminal complement complex in human plasma by an enzyme-linked immunosorbent assay based on monoclonal antibodies against a neoantigen of the complex.

T Lea,  M Harboe,  Stig S Frøland … (1985)
The fluid-phase terminal complement complex (TCC), consisting of the components C5b, C6, C7, C8, C9, and the S-protein, has recently been detected in normal human plasma by using antibodies against native terminal complement components. Increased amounts of TCC were then found in several patients with in vivo activation of complement. We now describe a sensitive, specific, and reliable enzyme-linked immunosorbent assay for quantification of the TCC, based on monoclonal antibodies against a neoantigen of the complex. The results indicate that the TCC is present in normal human plasma and in increased amounts in patients with complement activation in vivo, thus confirming previously obtained results. The assay is easy to perform and can be used for examination of large numbers of plasma samples.

Menso Nubé,  Tom Teerlink,  Marianne Schoorl … (2005)
During haemodialysis (HD), polymorphonuclear cells (PMNs) and platelets are activated and release various granule products, including myeloperoxidase (MPO) and platelet factor 4 (PF4). MPO triggers the generation of reactive oxygen species, leading to irreversible protein, carbohydrate and lipid modification. PF4 probably also contributes to oxidative stress. As previously shown, HD-induced PMN degranulation is almost completely abolished during citrate anticoagulation, most probably due to its calcium chelation ability. In the present study, apart from HD-induced PMN and platelet degranulation, oxidative stress was analysed during three modes of anticoagulation. Heparin, dalteparin and citrate (HDhep, HDdal and HDcit) were compared in a randomized, crossover fashion in eight chronic HD patients. Multiple blood samples were taken during the third HD session of each modality, from both the afferent and efferent line. Besides the degranulation markers MPO and PF4, various markers of oxidative stress were measured, including oxidized low-density lipoprotein (ox-LDL), malondialdehyde (MDA) and carboxymethyllysine (CML). During HDhep and HDdal, marked degranulation was observed shortly after the start of HD. In contrast, during HDcit, PF4 and MPO levels remained unaltered, suggesting no release at all. After 1 week of HDcit, ox-LDL levels were markedly reduced [median 26% (3-65%), P=0.01], if compared with HDhep and HDdal. As regards MDA and CML, no differences were found. This study shows first, that HD-induced PMN and platelet degranulation are early, most probably calcium-dependent processes and, secondly, that the formation of ox-LDL is clearly dependent on the type of anticoagulant applied.