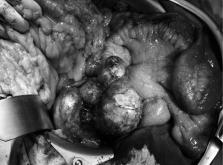 Primary pancreatic hydatid disease is extremely rare. Diagnosis of the disease is difficult because hydatid cysts can be confused with a pseudocyst or neoplastic cystic diseases. Authors report a case of a surgically treated hydatid disease of the uncinate process of pancreas. In a 34-year-old patient with minor symptoms, a cystic disease of the pancreas was accidentally identified. CT scan revealed a multivesicular cystic mass with a maximum of 13-cm diameter and with a calcificated wall. During laparotomy, the uncinate process of pancreas was resecated and the cystic lesion was enucleated. Patient was recovered without complications and recurrence of the disease. There must be a suspicion of hydatid disease when cysts are identified in good conditioned, asymptomatic patients, or in case of wall calcification or multivesicular cysts revealed by radiological images. Surgical procedures are recommended in uncertain diagnoses too, because differentiation preoperatively between cystic pancreatic lesions is often impossible.

Cystic neoplasms of the pancreas.

A Daghfous, Z Safta, S Ayadi … (2007)
The pancreas is an uncommon site of a hydatid cyst, even in countries where echinococcal disease is endemic. We report three cases of primary hydatid cysts of the pancreas revealed by abdominal pain. The diagnosis was based on ultrasound and CT-scan, which showed a cystic mass in the tail of the pancreas in the two first cases. In the third case, the diagnosis was determined preoperatively and a pancreatic fistula was found in the head of the pancreas during peroperative cholangiography. The echinococcal immunological test (Elisa) was positive in all cases. Surgical treatment included resection of the prominent lump in two patients and a cystogastric anastomosis in the third. Based on these three cases and a study of the literature, the difficulties of diagnosing this rare disease and the surgical procedures are discussed.

Acute pancreatitis due to pancreatic hydatid cyst: a case report and review of the literature

Amin Makni, Mohamed Jouini, Montassar Kacem … (2012)
Hydatid disease is a major health problem worldwide. Primary hydatid disease of the pancreas is very rare and acute pancreatitis secondary to hydatid cyst has rarely been reported. We report the case of a 38-year-old man who presented acute pancreatitis. A diagnosis of hydatid cyst of the pancreas, measuring 10 cm, was established by abdominal computed tomography before surgery. The treatment consisted of a distal pancreatectomy. The postoperative period was uneventful. Additionally, a review of the literature regarding case reports of acute pancreatitis due to pancreatic hydatid cyst is presented.

This is an open-access article distributed under the terms of the Creative Commons Attribution 4.0 International License, which permits unrestricted use, distribution, and reproduction in any medium, provided the original author and source are credited, a link to the CC License is provided, and changes – if any – are indicated. (SID_1)

Funding sources: No financial support was received for this study.