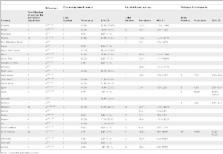 The soil-transmitted threadworm, Strongyloides stercoralis, is one of the most neglected among the so-called neglected tropical diseases (NTDs). We reviewed studies of the last 20 years on S. stercoralis's global prevalence in general populations and risk groups.

A literature search was performed in PubMed for articles published between January 1989 and October 2011. Articles presenting information on infection prevalence were included. A Bayesian meta-analysis was carried out to obtain country-specific prevalence estimates and to compare disease odds ratios in different risk groups taking into account the sensitivities of the diagnostic methods applied. A total of 354 studies from 78 countries were included for the prevalence calculations, 194 (62.4%) were community-based studies, 121 (34.2%) were hospital-based studies and 39 (11.0%) were studies on refugees and immigrants. World maps with country data are provided. In numerous African, Asian and South-American resource-poor countries, information on S. stercoralis is lacking. The meta-analysis showed an association between HIV-infection/alcoholism and S. stercoralis infection (OR: 2.17 BCI: 1.18–4.01; OR: 6.69; BCI: 1.47–33.8), respectively.

Our findings show high infection prevalence rates in the general population in selected countries and geographical regions. S. stercoralis infection is prominent in several risk groups. Adequate information on the prevalence is still lacking from many countries. However, current information underscore that S. stercoralis must not be neglected. Further assessments in socio-economic and ecological settings are needed and integration into global helminth control is warranted.

The soil-transmitted threadworm Strongyloides stercoralis is one of the most neglected helminth infections. It is endemic world-wide, yet more prevalent in hot and humid climates as well as resource poor countries with inadequate sanitary conditions. The difficult diagnosis and irregular excretion of larvae lead to an underreporting of infection rates. We reviewed the literature of the last 20 years reporting on infection rates of S. stercoralis. Including the sensitivity of diagnostic methods applied, we modeled and mapped for the first time country-wide prevalence estimates. The modeling was divided into studies reporting infection rates in the general population, in hospitals and on refugees & immigrants, respectively. We further summarized possible risk factors for S. stercoralis infection using meta-analysis. The most prominent risk factors include HIV-infection, HTLV-1 infection and alcoholism. Information on infection rates is missing in many countries. Our results show high prevalence estimates in many resource poor tropical and subtropical countries. We conclude that S. stercoralis should not be neglected and that further studies applying high sensitivity diagnostic methods are needed.

Luis A. Marcos,  Angelica Terashima,  Herbert L DuPont … (2008)
The hyperinfection syndrome (HS) caused by Strongyloides stercoralis has a high mortality rate (15% to 87%). A variety of risk factors and predisposing conditions have been described, including new immunosuppressive therapies; HTLV-1 infection; cadaveric transplantation; immune reconstitution syndrome; haematological malignancies (especially lymphoma); tuberculosis; malnutrition secondary to chronic Strongyloides diarrhoea; international travel and immigration. Inhibition of Th2 cell-mediated, humoral or mucosal immunity is associated with HS. HS is more frequently seen in HTLV-1 than HIV patients. In AIDS, there is an increase in Th2 cytokines, while in HTLV-1 infection there is a decrease in the Th2 response, leading to an increased risk of autoinfection. Corticosteroid use remains the most frequent risk factor for HS. A number of ELISAs are useful for diagnosis and post-treatment evaluation. Once diagnosed, the disease may be managed effectively with anthelminthic drugs, including ivermectin. HS causes diverse symptoms and signs, with unusual manifestations leading to misdiagnosis and medical errors related to healthcare providers' lack of familiarity with the condition. HS is an example of an emerging tropical infection migrating to developed countries and requiring greater clinician awareness.

FS and VK received financial support from the UBS Optimus Foundation. The funders had no role in study design, data collection and analysis, decision to publish, or preparation of the manuscript.