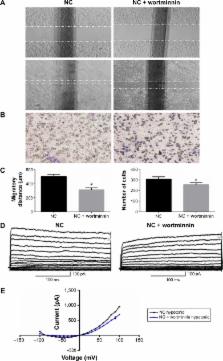 Accumulating evidence has demonstrated that migration of keratinocytes is critical to wound epithelialization, and defects of this function result in chronic delayed-healing wounds in diabetes mellitus patients, and the migration has been proved to be associated with volume-activated chloride channels. The aim of the study is to investigate the effects of high glucose (HG, 25 mM) on ClC-2 chloride channels and cell migration of keratinocytes.

We found that the expression of ClC-2 was significantly inhibited when keratinocytes were exposed to a HG (25 mM) medium, accompanied by the decline of volume-activated Cl − current ( I Cl,vol), migration potential, and phosphorylated PI3K as compared to control group. When knockdown of ClC-2 by RNAi or pretreatment with wortmannin, similar results were observed, including I Cl,vol and migration keratinocytes were inhibited.

H. Kim,  Jean-Pierre Rossi (2007)
Since the first description of RNA interference (RNAi) in animals less than a decade ago, there has been rapid progress towards its use as a therapeutic modality against human diseases. Advances in our understanding of the mechanisms of RNAi and studies of RNAi in vivo indicate that RNAi-based therapies might soon provide a powerful new arsenal against pathogens and diseases for which treatment options are currently limited. Recent findings have highlighted both promise and challenges in using RNAi for therapeutic applications. Design and delivery strategies for RNAi effector molecules must be carefully considered to address safety concerns and to ensure effective, successful treatment of human diseases.

The molecular biology of chronic wounds and delayed healing in diabetes.

E. Jude,  R Blakytny (2006)
Wound healing is a complicated and integrated process. Although there is some tolerance in terms of redundancy and interrelated control mechanisms, pushing beyond such limits may contribute to delayed wound healing, and in extreme cases lead to chronic wounds/ulcers and thus potentially to lower extremity amputation. Diabetes is associated with such disruption in wound healing. Research in humans and in animal models has identified a large number of changes associated with diabetes at the molecular level in delayed wound healing and to a lesser extent in chronic diabetic ulcers. Better overall understanding of these changes and how they are interrelated would allow for specifically targeted treatment, thus ensuring improved quality of life for patients and providing savings to the high costs that are associated with all aspects of chronic diabetic ulcers. This review examines the work done at the molecular level on chronic diabetic ulcers, as well as considering changes seen in diabetes in general, both in humans and animal models, that may in turn contribute to ulcer formation.

E Gulbins,  Dieter Häussinger,  G Busch … (1997)
To survive, cells have to avoid excessive alterations of cell volume that jeopardize structural integrity and constancy of intracellular milieu. The function of cellular proteins seems specifically sensitive to dilution and concentration, determining the extent of macromolecular crowding. Even at constant extracellular osmolarity, volume constancy of any mammalian cell is permanently challenged by transport of osmotically active substances across the cell membrane and formation or disappearance of cellular osmolarity by metabolism. Thus cell volume constancy requires the continued operation of cell volume regulatory mechanisms, including ion transport across the cell membrane as well as accumulation or disposal of organic osmolytes and metabolites. The various cell volume regulatory mechanisms are triggered by a multitude of intracellular signaling events including alterations of cell membrane potential and of intracellular ion composition, various second messenger cascades, phosphorylation of diverse target proteins, and altered gene expression. Hormones and mediators have been shown to exploit the volume regulatory machinery to exert their effects. Thus cell volume may be considered a second message in the transmission of hormonal signals. Accordingly, alterations of cell volume and volume regulatory mechanisms participate in a wide variety of cellular functions including epithelial transport, metabolism, excitation, hormone release, migration, cell proliferation, and cell death.