Comparison of retrograde intrarenal surgery versus a single-session percutaneous nephrolithotomy for lower-pole stones with a diameter of 15 to 30 mm: A propensity score-matching study 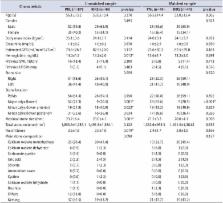 To investigate surgical outcomes between retrograde intrarenal surgery (RIRS) and percutaneous nephrolithotomy (PNL) groups for a main stone sized 15 to 30 mm and located in the lower-pole calyx.

Patients who underwent PNL or RIRS for a main stone sized 15 to 30 mm and located in the lower-pole calyx were retrospectively reviewed. Each patient in the RIRS group was matched to one in the PNL group on the basis of calculated propensity scores by use of age, sex, body mass index, previous treatment history, stone site, maximum stone size, and stone volume. We compared perioperative outcomes between the unmatched and matched groups.

RIRS and single-session PNL for patients with a main stone of 15 to 30 mm located in the lower-pole calyx showed comparable surgical results. However, RIRS can be performed more safely than PNL with less bleeding. Stones in the lower-anterior minor calyx should be carefully removed during these procedures.

Comparison of percutaneous nephrolithotomy and retrograde flexible nephrolithotripsy for the management of 2-4 cm stones: a matched-pair analysis.

Ivy R. Aslan,  Cem Kezer,  Ahmet Muslumanoglu … (2012)
Study Type--Therapy (case control). Level of Evidence 3b. What's known on the subject? and What does the study add? Recently European Association of Urology 2011 guidelines on urolithiasis recommended retrograde intrarenal surgery as the second-line therapy for the treatment of kidney stones <10 mm in diameter. This study shows that retrograde intrarenal surgery may be an alternative therapy to percutaneous nephrolithotomy, with acceptable efficacy and low morbidity for 2-4 cm stones. • Currently, the indications for retrograde intrarenal surgery (RIRS) have been extended due to recent improvements in endoscopic technology. In this study, we compare the outcomes of percutaneous nephrolithotomy (PCNL) and RIRS in the treatment of 2-4 cm kidney stones. • Between September 2008 and January 2011, 34 patients who had renal stones ranging from 2 to 4 cm in diameter were treated with RIRS. The outcomes of these patients were compared with patients who underwent PCNL using matched-pair analysis (1:1 scenario). • The matching parameters were the size, number and location of the stones as well as age, gender, body mass index, solitary kidney, degree of hydronephrosis, presence of previous shock wave lithotripsy and open surgery. • Data were analysed using Fisher's exact test, Student's t test and the Mann-Whitney U test. • Stone-free rates after one session were 73.5% and 91.2% for RIRS and PCNL respectively (P= 0.05). Stone-free rate in the RIRS group improved to 88.2% after the second procedure. • Mean operation duration was 58.2 (±) 13.4 min in the RIRS group but 38.7 (±) 11.6 min in the PCNL group (P < 0.0001). Blood transfusions were required in two patients in the PCNL group. • Overall complication rates in the PCNL group were higher, but the differences were not statistically significant. Hospitalization time was significantly shorter in the RIRS group (30.0 + 37.4 vs 61.4 + 34.0 h, respectively; P < 0.001). • Satisfactory outcomes can be achieved with multi-session RIRS in the treatment of 2-4 cm renal stones. RIRS can be used as an alternative treatment to PCNL in selected cases with larger renal stones. © 2011 THE AUTHORS. BJU INTERNATIONAL © 2011 BJU INTERNATIONAL.

Retrograde intrarenal surgery versus percutaneous nephrolithotomy in the management of lower-pole renal stones with a diameter of 15 to 20 mm.

Tolga O. Bozkurt,  Berkan Resorlu,  E Can … (2011)
To compare the outcomes of percutaneous nephrolithotomy (PCNL) and retrograde intrarenal surgery (RIRS) for 15 to 20 mm lower-pole (LP) renal calculi by evaluating stone-free rates and associated complications. The records of 79 patients who underwent either PCNL (n=42) or RIRS (n=37) by standard techniques for 15 to 20 mm LP renal calculi were reviewed retrospectively. In the PCNL group, the stone-free rate was 92.8% (39/42 patients); this rate increased to 97.6% after a second intervention (shockwave lithotripsy in one and RIRS in one). After a single RIRS procedure, 33 of 37 (89.2%) patients were completely stone free. Two patients needed an additional procedure (rigid ureteroscopy in one and RIRS in one), after which they were all completely stone free, resulting in an overall success rate of 94.6%. Two patients had asymptomatic residual fragments <7 mm in the LP of the kidney, and these patients had been followed with ultrasonography of the kidney. For complications, there were minimal differences in both procedures, except for hemorrhage (necessitated transfusion) in three patients who were treated with PCNL. The overall stone-free rates and complication rates for PCNL were higher, but the differences were not statistically significant. Operative time was significantly longer in the RIRS group, and postoperative hospital stay was significantly longer in PCNL group. PCNL and RIRS are safe and effective methods for medium-sized LP calculi. For selected patients, RIRS may represent an alternative therapy to PCNL, with acceptable efficacy and low morbidity.

Chang Jeong,  Jin Woo Jung,  Woo Heon Cha … (2013)
Objectives Currently, no standardized method is available to predict success rate after percutaneous nephrolithotomy. We devised and validated the Seoul National University Renal Stone Complexity (S-ReSC) scoring system for predicting the stone-free rate after single-tract percutaneous nephrolithotomy (sPCNL). Patients and Methods The data of 155 consecutive patients who underwent sPCNL were retrospectively analyzed. Preoperative computed tomography images were reviewed. The S-ReSC score was assigned from 1 to 9 based on the number of sites involved in the renal pelvis (#1), superior and inferior major calyceal groups (#2–3), and anterior and posterior minor calyceal groups of the superior (#4–5), middle (#6–7), and inferior calyx (#8–9). The inter- and intra-observer agreements were accessed using the weighted kappa (κ). The stone-free rate and complication rate were evaluated according to the S-ReSC score. The predictive accuracy of the S-ReSC score was assessed using the area under the receiver operating characteristic curve (AUC). Results The overall SFR was 72.3%. The mean S-ReSC score was 3.15±2.1. The weighted kappas for the inter- and intra-observer agreements were 0.832 and 0.982, respectively. The SFRs in low (1 and 2), medium (3 and 4), and high (5 or higher) S-ReSC scores were 96.0%, 69.0%, and 28.9%, respectively (p<0.001). The predictive accuracy was very high (AUC 0.860). After adjusting for other variables, the S-ReSC score was still a significant predictor of the SFR by multiple logistic regression. The complication rates were increased to low (18.7%), medium (28.6%), and high (34.2%) (p = 0.166). Conclusions The S-ReSC scoring system is easy to use and reproducible. This score accurately predicts the stone-free rate after sPCNL. Furthermore, this score represents the complexity of surgery.