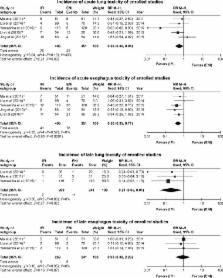 Kuai-le Zhao,  Jin-bo Ma,  Guang Liu … (2010)
To evaluate the local control, survival, and toxicity associated with three-dimensional conformal radiotherapy (3D-CRT) for squamous cell carcinoma (SCC) of the esophagus, to determine the appropriate target volumes, and to determine whether elective nodal irradiation is necessary in these patients. A prospective study of 3D-CRT was undertaken in patients with esophageal SCC without distant metastases. Patients received 68.4 Gy in 41 fractions over 44 days using late-course accelerated hyperfractionated 3D-CRT. Only the primary tumor and positive lymph nodes were irradiated. Isolated out-of-field regional nodal recurrence was defined as a recurrence in an initially uninvolved regional lymph node. All 53 patients who made up the study population tolerated the irradiation well. No acute or late Grade 4 or 5 toxicity was observed. The median survival time was 30 months (95% confidence interval, 17.7-41.8). The overall survival rate at 1, 2, and 3 years was 77%, 56%, and 41%, respectively. The local control rate at 1, 2, and 3 years was 83%, 74%, and 62%, respectively. Thirty-nine of the 53 patients (74%) showed treatment failure. Seventeen of the 39 (44%) developed an in-field recurrence, 18 (46%) distant metastasis with or without regional failure, and 3 (8%) an isolated out-of-field nodal recurrence only. One patient died of disease in an unknown location. In patients treated with 3D-CRT for esophageal SCC, the omission of elective nodal irradiation was not associated with a significant amount of failure in lymph node regions not included in the planning target volume. Local failure and distant metastases remained the predominant problems. Copyright 2010 Elsevier Inc. All rights reserved.

Stephen Ansell (2015)
Hodgkin lymphoma is a rare B-cell malignant neoplasm affecting approximately 9000 new patients annually. This disease represents approximately 11% of all lymphomas seen in the United States and comprises 2 discrete disease entities--classical Hodgkin lymphoma and nodular lymphocyte-predominant Hodgkin lymphoma. Within the subcategorization of classical Hodgkin lymphoma are defined subgroups: nodular sclerosis, mixed cellularity, lymphocyte depletion, and lymphocyte-rich Hodgkin lymphoma. Staging of this disease is essential for the choice of optimal therapy. Prognostic models to identify patients at high or low risk for recurrence have been developed, and these models, along with positron emission tomography, are used to provide optimal therapy. The initial treatment for patients with Hodgkin lymphoma is based on the histologic characteristics of the disease, the stage at presentation, and the presence or absence of prognostic factors associated with poor outcome. Patients with early-stage Hodgkin lymphoma commonly receive combined-modality therapies that include abbreviated courses of chemotherapy followed by involved-field radiation treatment. In contrast, patients with advanced-stage Hodgkin lymphoma commonly receive a more prolonged course of combination chemotherapy, with radiation therapy used only in selected cases. For patients with relapse or refractory disease, salvage chemotherapy followed by high-dose treatment and an autologous stem cell transplant is the standard of care. For patients who are ineligible for this therapy or those in whom high-dose therapy and autologous stem cell transplant have failed, treatment with brentuximab vedotin is a standard approach. Additional options include palliative chemotherapy, immune checkpoint inhibitors, nonmyeloablative allogeneic stem cell transplant, or participation in a clinical trial testing novel agents.

SHINO SHIBATA,  Keiichi Nakagawa,  Kuni Ohtomo … (2011)
To describe patterns of recurrence of elective nodal irradiation (ENI) in definitive chemoradiotherapy (CRT) for thoracic esophageal squamous cell carcinoma (SqCC) using 3D-conformal radiotherapy. One hundred and twenty-six consecutive patients with stages I-IVB thoracic esophageal SqCC newly diagnosed between June 2000 and July 2009 and treated with 3D-CRT in our institution were recruited from our database. Definitive CRT consisted of two cycles of nedaplatin/5FU repeated every 4 weeks, with concurrent radiation therapy of 50-50.4 Gy in 25-28 fractions. Until completion, radiotherapy was delivered to the N1 and M1a lymph nodes as ENI in addition to gross tumor volume. All 126 patients were included in this analysis, and their tumors were staged as follows: T1/T2/T3/T4, 28/18/54/26; N0/N1, 50/76; M0/M1a/M1b, 91/5/30. The mean follow-up period for the 63 surviving patients was 28.3 (±22.8) months. Eighty-seven patients (69%) achieved complete response (CR) without any residual tumor at least once after completion of CRT. After achieving CR, each of 40 patients experienced failures (local=20 and distant=20) and no patient experienced elective nodal failure without having any other site of recurrence. The upper thoracic esophageal carcinoma showed significantly more (34%) relapses at the local site than the middle (9%) or lower thoracic (11%) carcinomas. The 2-year and 3-year overall survival was 56% and 43%, respectively. The 1-year, 2-year and 3-year disease-free survival was 46%, 38% and 33%, respectively. In CRT for esophageal SqCC, ENI was effective for preventing regional nodal failure. The upper thoracic esophageal carcinomas had significantly more local recurrences than the middle or lower thoracic sites. Copyright © 2010 Elsevier Ireland Ltd. All rights reserved.