The timetable of evolution 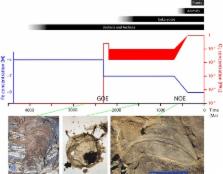 The integration of fossils, phylogeny, and geochronology has resulted in an increasingly well-resolved timetable of evolution. Life appears to have taken root before the earliest known minimally metamorphosed sedimentary rocks were deposited, but for a billion years or more, evolution played out beneath an essentially anoxic atmosphere. Oxygen concentrations in the atmosphere and surface oceans first rose in the Great Oxygenation Event (GOE) 2.4 billion years ago, and a second increase beginning in the later Neoproterozoic Era [Neoproterozoic Oxygenation Event (NOE)] established the redox profile of modern oceans. The GOE facilitated the emergence of eukaryotes, whereas the NOE is associated with large and complex multicellular organisms. Thus, the GOE and NOE are fundamental pacemakers for evolution. On the time scale of Earth’s entire 4 billion–year history, the evolutionary dynamics of the planet’s biosphere appears to be fast, and the pace of evolution is largely determined by physical changes of the planet. However, in Phanerozoic ecosystems, interactions between new functions enabled by the accumulation of characters in a complex regulatory environment and changing biological components of effective environments appear to have an important influence on the timing of evolutionary innovations. On the much shorter time scale of transient environmental perturbations, such as those associated with mass extinctions, rates of genetic accommodation may have been limiting for life.

The Cambrian conundrum: early divergence and later ecological success in the early history of animals.

Douglas Erwin, Marc Laflamme, Sarah Tweedt … (2011)
Diverse bilaterian clades emerged apparently within a few million years during the early Cambrian, and various environmental, developmental, and ecological causes have been proposed to explain this abrupt appearance. A compilation of the patterns of fossil and molecular diversification, comparative developmental data, and information on ecological feeding strategies indicate that the major animal clades diverged many tens of millions of years before their first appearance in the fossil record, demonstrating a macroevolutionary lag between the establishment of their developmental toolkits during the Cryogenian [(850 to 635 million years ago (Ma)], and the later ecological success of metazoans during the Ediacaran (635 to 541 Ma) and Cambrian (541 to 488 Ma) periods. We argue that this diversification involved new forms of developmental regulation, as well as innovations in networks of ecological interaction within the context of permissive environmental circumstances.

The Chicxulub asteroid impact and mass extinction at the Cretaceous-Paleogene boundary.

Peter Z. Schulte, Laia Alegret, Ignacio Arenillas … (2010)
The Cretaceous-Paleogene boundary approximately 65.5 million years ago marks one of the three largest mass extinctions in the past 500 million years. The extinction event coincided with a large asteroid impact at Chicxulub, Mexico, and occurred within the time of Deccan flood basalt volcanism in India. Here, we synthesize records of the global stratigraphy across this boundary to assess the proposed causes of the mass extinction. Notably, a single ejecta-rich deposit compositionally linked to the Chicxulub impact is globally distributed at the Cretaceous-Paleogene boundary. The temporal match between the ejecta layer and the onset of the extinctions and the agreement of ecological patterns in the fossil record with modeled environmental perturbations (for example, darkness and cooling) lead us to conclude that the Chicxulub impact triggered the mass extinction.

Laura Wegener Parfrey, Daniel Lahr, Andrew Knoll … (2011)
Although macroscopic plants, animals, and fungi are the most familiar eukaryotes, the bulk of eukaryotic diversity is microbial. Elucidating the timing of diversification among the more than 70 lineages is key to understanding the evolution of eukaryotes. Here, we use taxon-rich multigene data combined with diverse fossils and a relaxed molecular clock framework to estimate the timing of the last common ancestor of extant eukaryotes and the divergence of major clades. Overall, these analyses suggest that the last common ancestor lived between 1866 and 1679 Ma, consistent with the earliest microfossils interpreted with confidence as eukaryotic. During this interval, the Earth's surface differed markedly from today; for example, the oceans were incompletely ventilated, with ferruginous and, after about 1800 Ma, sulfidic water masses commonly lying beneath moderately oxygenated surface waters. Our time estimates also indicate that the major clades of eukaryotes diverged before 1000 Ma, with most or all probably diverging before 1200 Ma. Fossils, however, suggest that diversity within major extant clades expanded later, beginning about 800 Ma, when the oceans began their transition to a more modern chemical state. In combination, paleontological and molecular approaches indicate that long stems preceded diversification in the major eukaryotic lineages.