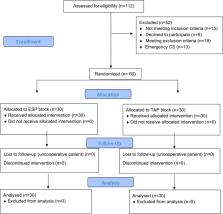 This study compared the analgesic efficacy of a bilateral erector spinae plane (ESP) block with that of a bilateral transversus abdominis plane (TAP) block after elective cesarean delivery.

Sixty mothers scheduled for elective cesarean delivery under spinal anesthesia were randomly allocated to receive either ESP block or TAP block. The ESP group received ESP block at the level of the ninth thoracic transverse process with 20 mL of 0.25% bupivacaine at the end of surgery. The TAP group received an ultrasound-guided TAP block with 20 mL of 0.25% bupivacaine on completion of delivery. The primary outcome was the duration of analgesia achieved by each block. Secondary outcome measures were the postoperative pain severity, total tramadol consumption, patient satisfaction.

Compared with the TAP block, the ESP block provides more effective pain relief, has a longer duration of analgesic action, prolongs time to first analgesic requirement, is associated with less tramadol consumption, and can be used in multimodal analgesia and opioid-sparing regimens after cesarean section.

Moira Baeriswyl,  Kyle Kirkham,  Christian Kern … (2015)
Previous meta-analyses of the transversus abdominis plane (TAP) block have examined a maximum of 12 articles, including fewer than 650 participants, and have not examined the effect of ultrasound-guided techniques specifically. Recently, many trials that use ultrasound approaches to TAP block have been published, which report conflicting analgesic results. This meta-analysis aims to evaluate the analgesic efficacy of ultrasound-guided TAP blocks exclusively for all types of abdominal surgeries in adult patients.

The authors have no sources of funding to declare for this manuscript.