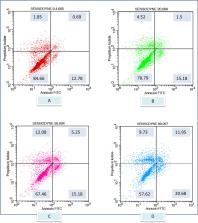 Tissues required for the isolation of human gingival epithelial cells were obtained by biopsy during the extraction of the impacted third molar tooth. Toothpaste solutions of different concentrations were prepared from five different children’s toothpastes with different detergent contents. Isolated gingival epithelial cells were stimulated with experimental groups consisting of toothpaste solutions (Colgate, Sensodyne, Splat, Nenedent, Perlodent) at different concentrations and a control group consisting of complete Dulbecco’s modified eagle medium. After the experiments, cell viability was evaluated using flow cytometry. 2 Way ANOVA was used to see the interaction effect of the main effects of toothpaste solution and concentration factors. Pairwise comparisons were made by Tukey post hoc tests. In the study, the significance level was taken as 0.05.

As a result of the analysis, it was seen that the toothpaste solution and concentration factors and the interactions of these 2 factors were effective on the viable, early apoptotic, late apoptotic and necrotic cell rates. The statistically highest live cell ratios were detected in Splat’s toothpaste solutions (90.14% at 0.4% concentration) after the control group (90.82%) and the group with the lowest viability values was determined in Colgate group (75.74% at 0.4% concentration) ( p < 0.05).

According to the results of the study, it was observed that toothpastes containing SLS affected the viability of cells more negatively than toothpastes with other detergent contents.

In vitro cytotoxicity evaluation of a novel root repair material.

Hui-min Zhou, Ya Shen, Zhe-jun Wang … (2013)
This study examined the effect of a new bioactive dentin substitute material (Biodentine) on the viability of human gingival fibroblasts.

Toru Takeshita, Masaki Yasui, Yukie Shibata … (2015)
Dental plaque is a dynamic microbial biofilm ecosystem that comprises hundreds of species including difficult-to-cultivate bacteria. We observed the assembly of a plaque bacterial community through 16S rRNA gene analysis. Plaque samples that accumulated on a hydroxyapatite disk for 1, 2, 3, 4, 5, and 7 days with saliva on day 0 were collected from 19 young adults using a removable resin splint. Quantitative PCR analysis showed that the total bacterial amount gradually increased and reached a plateau on day 4. Barcoded pyrosequencing analysis revealed that the microbial richness and diversity particularly increased between days 5 and 7. A principal coordinate analysis plot based on unweighted UniFrac showed the community assembly in a time-related manner, which became increasingly similar to the salivary microbiota. Facultative anaerobic bacteria such as Streptococcus, Neisseria, Abiotrophia, Gemella, and Rothia were predominant in the plaque bacterial community in the earlier days, whereas obligate anaerobes, such as Porphyromonas, Fusobacterium, Prevotella, and Capnocytophaga showed increased dominance on later days. UniFrac analysis also demonstrated that dental caries experience had a significant effect on the assembly process. Our results reveal the development pattern of the plaque bacterial community as well as the inter-individual differences associated with dental caries experience.