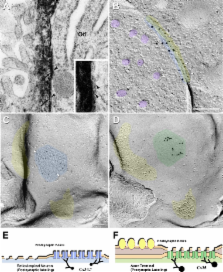 Journal: The Journal of Membrane Biology

Despite the combination of light-microscopic immunocytochemistry, histochemical mRNA detection techniques and protein reporter systems, progress in identifying the protein composition of neuronal versus glial gap junctions, determination of the differential localization of their constituent connexin proteins in two apposing membranes and understanding human neurological diseases caused by connexin mutations has been problematic due to ambiguities introduced in the cellular and subcellular assignment of connexins. Misassignments occurred primarily because membranes and their constituent proteins are below the limit of resolution of light microscopic imaging techniques. Currently, only serial thin-section transmission electron microscopy and freeze-fracture replica immunogold labeling have sufficient resolution to assign connexin proteins to either or both sides of gap junction plaques. However, freeze-fracture replica immunogold labeling has been limited because conventional freeze fracturing allows retrieval of only one of the two membrane fracture faces within a gap junction, making it difficult to identify connexin coupling partners in hemiplaques removed by fracturing. We now summarize progress in ascertaining the connexin composition of two coupled hemiplaques using matched double-replicas that are labeled simultaneously for multiple connexins. This approach allows unambiguous identification of connexins and determination of the membrane “sidedness” and the identities of connexin coupling partners in homotypic and heterotypic gap junctions of vertebrate neurons.

Roy Stevens,  F. Mueller,  David Parry … (1997)
Severe deafness or hearing impairment is the most prevalent inherited sensory disorder, affecting about 1 in 1,000 children. Most deafness results from peripheral auditory defects that occur as a consequence of either conductive (outer or middle ear) or sensorineuronal (cochlea) abnormalities. Although a number of mutant genes have been identified that are responsible for syndromic (multiple phenotypic disease) deafness such as Waardenburg syndrome and Usher 1B syndrome, little is known about the genetic basis of non-syndromic (single phenotypic disease) deafness. Here we study a pedigree containing cases of autosomal dominant deafness and have identified a mutation in the gene encoding the gap-junction protein connexin 26 (Cx26) that segregates with the profound deafness in the family. Cx26 mutations resulting in premature stop codons were also found in three autosomal recessive non-syndromic sensorineuronal deafness pedigrees, genetically linked to chromosome 13q11-12 (DFNB1), where the Cx26 gene is localized. Immunohistochemical staining of human cochlear cells for Cx26 demonstrated high levels of expression. To our knowledge, this is the first non-syndromic sensorineural autosomal deafness susceptibility gene to be identified, which implicates Cx26 as an important component of the human cochlea.

Structural and functional diversity of connexin genes in the mouse and human genome.

Joachim Degen,  URBAN DEUTSCH,  Goran Söhl … (2002)
Gap junctions are clustered channels between contacting cells through which direct intercellular communication via diffusion of ions and metabolites can occur. Two hemichannels, each built up of six connexin protein subunits in the plasma membrane of adjacent cells, can dock to each other to form conduits between cells. We have recently screened mouse and human genomic data bases and have found 19 connexin (Cx) genes in the mouse genome and 20 connexin genes in the human genome. One mouse connexin gene and two human connexin genes do not appear to have orthologs in the other genome. With three exceptions, the characterized connexin genes comprise two exons whereby the complete reading frame is located on the second exon. Targeted ablation of eleven mouse connexin genes revealed basic insights into the functional diversity of the connexin gene family. In addition, the phenotypes of human genetic disorders caused by mutated connexin genes further complement our understanding of connexin functions in the human organism. In this review we compare currently identified connexin genes in both the mouse and human genome and discuss the functions of gap junctions deduced from targeted mouse mutants and human genetic disorders.