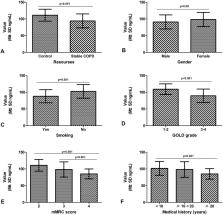 The aim of this study was to reveal the correlations between serum concentration of Clara cell secretory protein (CC16) and clinical parameters of stable chronic obstructive pulmonary disease (COPD).

Serum concentration of CC16 was determined by enzyme-linked immunosorbent assay (ELISA). The correlations between serum concentration of CC16 and clinical parameters was performed by linear correlation analysis and multiple linear regression analysis. The sensitivity and specificity of serum CC16 for differential diagnosis of COPD were determined by receiver operator characteristic curve (ROC).

The serum concentration of CC16 was down-regulated in stable COPD patients compared with healthy control group (p < 0.05). The decreased serum CC16 was negatively related to smoking (p < 0.05), GOLD grading (p < 0.005), mMRC score (p < 0.05) and medical history (p < 0.05) of patients, but positively correlated with pulmonary function (p < 0.05). The smoking, FEV1/FVC values, COPD grading and mMRC scores all affected the concentration of CC16 (p < 0.05). The decreased CC16 was an independent risk factor in the process of deterioration of lung function. The sensitivity and specificity of serum CC16 for identifying COPD reached to 65.3% and 75%.

Decreased serum concentration of CC16 correlated with the disease progression of COPD, suggesting that it can be used as an indicator contributing to the diagnosis and assessment of COPD.

David M G Halpin,  M López Varela,  Masaharu Nishimura … (2017)
This Executive Summary of the Global Strategy for the Diagnosis, Management and Prevention of COPD, Global Initiative for Chronic Obstructive Lung Disease (GOLD) 2017 Report focuses primarily on the revised and novel parts of the document. The most significant changes include: (i) the assessment of chronic obstructive pulmonary disease has been refined to separate the spirometric assessment from symptom evaluation. ABCD groups are now proposed to be derived exclusively from patient symptoms and their history of exacerbations; (ii) for each of the groups A to D, escalation strategies for pharmacological treatments are proposed; (iii) the concept of de-escalation of therapy is introduced in the treatment assessment scheme; (iv)non-pharmacological therapies are comprehensively presented and (v) the importance of co-morbid conditions in managing COPD is reviewed.

Carolyn S Calfee,  Erin B. Ware,  Richard Fremont … (2009)
Acute lung injury (ALI) and ARDS are common clinical syndromes that are underdiagnosed. Clara cell secretory protein (CC16) is an antiinflammatory protein secreted by the Clara cells of the distal respiratory epithelium that has been proposed as a biomarker of lung epithelial injury. We tested the diagnostic and prognostic utility of CC16 in patients with non-trauma-related ALI/ARDS compared to a control group of patients with acute cardiogenic pulmonary edema (CPE). Plasma and pulmonary edema fluid samples were obtained from medical and surgical patients with ALI/ARDS or CPE requiring intubation for mechanical ventilation. The etiology of pulmonary edema was determined using consensus clinical criteria for ALI/ARDS and CPE and the edema fluid-to-plasma protein ratio. Plasma and edema fluid CC16 levels were measured by sandwich enzyme-linked immunosorbent assay. CC16 levels were log transformed for analysis, and comparisons were made by the Student t test or Chi(2) as appropriate. Compared to patients with CPE (n = 9), patients with ALI/ARDS (n = 23) had lower median CC16 levels in plasma (22 ng/mL [interquartile range (IQR), 9 to 44 ng/mL] vs 55 ng/mL [IQR, 18 to 123 ng/mL], respectively; p = 0.053) and pulmonary edema fluid (1,950 ng/mL [IQR, 1,780 to 4,024 ng/mL] vs 4,835 ng/mL [IQR, 2,006 to 6,350 ng/mL], respectively; p = 0.044). Relative to total pulmonary edema fluid protein concentration, the median CC16 level was significantly lower in patients with ALI/ARDS (45 ng CC16/mg total protein [IQR, 4 to 64 ng CC16/mg total protein] vs 120 ng CC16/mg total protein [IQR, 87 to 257 ng CC16/mg total protein], respectively; p = 0.005). Neither plasma nor edema fluid CC16 levels predicted mortality, the number of days of unassisted ventilation, or ICU length of stay. CC16 is a promising diagnostic biomarker for helping to discriminate ALI from CPE. Larger scale validation is warranted to better characterize the utility of CC16 in the diagnosis of this underrecognized syndrome.

Evaluation of serum CC-16 as a biomarker for COPD in the ECLIPSE cohort.

Andrew Edwards,  E Silverman,  D Lomas … (2008)
Circulating levels of Clara cell secretory protein-16 (CC-16) have been linked to Clara cell toxicity. It has therefore been suggested that this protein may be a useful marker of chronic obstructive pulmonary disease (COPD). Serum CC-16 levels were measured in 2083 individuals aged 40-75 years with COPD and a smoking history of >or=10 pack-years, 332 controls with a smoking history of >or=10 pack-years and normal lung function and 237 non-smoking controls. Serum CC-16 had a coefficient of repeatability of 2.90 over 3 months in a pilot study of 267 individuals. The median serum CC-16 level was significantly reduced in a replication group of 1888 current and former smokers with COPD compared with 296 current and former smokers without airflow obstruction (4.9 and 5.6 ng/ml, respectively; p<0.001) and 201 non-smokers (6.4 ng/ml; p<0.001). Serum levels of CC-16 were lower in current than in former smokers with GOLD stage II and III COPD but were not different in individuals with stage IV disease. Former, but not current smokers, with COPD had lower serum CC-16 levels with increasing severity of COPD (GOLD II vs GOLD IV COPD: 5.5 and 5.0 ng/ml, p = 0.006; r = 0.11 with forced expiratory volume in 1 s, p<0.001) and had significantly higher levels if they also had reversible airflow obstruction (p = 0.034). Serum CC-16 was affected by gender and age (r = 0.35; p<0.001) in subjects with COPD but not by body mass index or the presence of either chronic bronchitis or emphysema. Serum CC-16 levels are reduced in individuals with COPD and there is a weak correlation with disease severity in former smokers.