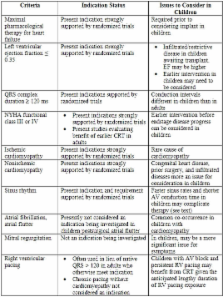 Jennifer Smith,  W. Fisher,  Peggy McAtee … (2002)
Previous studies have suggested that cardiac resynchronization achieved through atrial-synchronized biventricular pacing produces clinical benefits in patients with heart failure who have an intraventricular conduction delay. We conducted a double-blind trial to evaluate this therapeutic approach. Four hundred fifty-three patients with moderate-to-severe symptoms of heart failure associated with an ejection fraction of 35 percent or less and a QRS interval of 130 msec or more were randomly assigned to a cardiac-resynchronization group (228 patients) or to a control group (225 patients) for six months, while conventional therapy for heart failure was maintained. The primary end points were the New York Heart Association functional class, quality of life, and the distance walked in six minutes. As compared with the control group, patients assigned to cardiac resynchronization experienced an improvement in the distance walked in six minutes (+39 vs. +10 m, P=0.005), functional class (P<0.001), quality of life (-18.0 vs. -9.0 points, P= 0.001), time on the treadmill during exercise testing (+81 vs. +19 sec, P=0.001), and ejection fraction (+4.6 percent vs. -0.2 percent, P<0.001). In addition, fewer patients in the group assigned to cardiac resynchronization than control patients required hospitalization (8 percent vs. 15 percent) or intravenous medications (7 percent vs. 15 percent) for the treatment of heart failure (P<0.05 for both comparisons). Implantation of the device was unsuccessful in 8 percent of patients and was complicated by refractory hypotension, bradycardia, or asystole in four patients (two of whom died) and by perforation of the coronary sinus requiring pericardiocentesis in two others. Cardiac resynchronization results in significant clinical improvement in patients who have moderate-to-severe heart failure and an intraventricular conduction delay.

Patrick J. Tchou,  Sherif Nagueh,  José Pires … (2007)
Indications for cardiac-resynchronization therapy (CRT) in patients with heart failure include a prolonged QRS interval (> or =120 msec), in addition to other functional criteria. Some patients with narrow QRS complexes have echocardiographic evidence of left ventricular mechanical dyssynchrony and may also benefit from CRT. We enrolled 172 patients who had a standard indication for an implantable cardioverter-defibrillator. Patients received the CRT device and were randomly assigned to the CRT group or to a control group (no CRT) for 6 months. The primary end point was the proportion of patients with an increase in peak oxygen consumption of at least 1.0 ml per kilogram of body weight per minute during cardiopulmonary exercise testing at 6 months. At 6 months, the CRT group and the control group did not differ significantly in the proportion of patients with the primary end point (46% and 41%, respectively). In a prespecified subgroup with a QRS interval of 120 msec or more, the peak oxygen consumption increased in the CRT group (P=0.02), but it was unchanged in a subgroup with a QRS interval of less than 120 msec (P=0.45). There were 24 heart-failure events requiring intravenous therapy in 14 patients in the CRT group (16.1%) and 41 events in 19 patients in the control group (22.3%), but the difference was not significant. CRT did not improve peak oxygen consumption in patients with moderate-to-severe heart failure, providing evidence that patients with heart failure and narrow QRS intervals may not benefit from CRT. (ClinicalTrials.gov number, NCT00132977 [ClinicalTrials.gov].). Copyright 2007 Massachusetts Medical Society.

Frank Cecchin,  Victoria Vetter,  Kathryn E Stephenson … (2005)
Our objective was to evaluate the short-term safety and efficacy of cardiac resynchronization therapy (CRT) in children. Cardiac resynchronization therapy has been beneficial for adult patients with poor left ventricular function and intraventricular conduction delay. The efficacy of this therapy in the young and in those with congenital heart disease (CHD) has not yet been established. This is a multi-center, retrospective evaluation of CRT in 103 patients from 22 institutions. Median age at time of implantation was 12.8 years (3 months to 55.4 years). Median duration of follow-up was four months (22 days to 1 year). The diagnosis was CHD in 73 patients (71%), cardiomyopathy in 16 (16%), and congenital complete atrioventricular block in 14 (13%). The QRS duration before pacing was 166.1 +/- 33.3 ms, which decreased after CRT by 37.7 +/- 30.7 ms (p < 0.01). Pre-CRT systemic ventricular ejection fraction (EF) was 26.2 +/- 11.6%. The EF increased by 12.8 +/- 12.7 EF units with a mean EF after CRT of 39.9 +/- 14.8% (p < 0.05). Of 18 patients who underwent CRT while listed for heart transplantation, 3 improved sufficiently to allow removal from the transplant waiting list, 5 underwent transplant, 2 died, and 8 others are currently awaiting transplant. Cardiac resynchronization therapy appears to offer benefit in pediatric and CHD patients who differ substantially from the adult populations in whom this therapy has been most thoroughly evaluated to date. Further studies looking at the long-term benefit of this therapy in this population are needed.