Management of hyperkalemia during treatment with mineralocorticoid receptor blockers: findings from esaxerenone 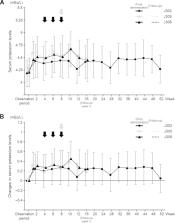 The nonsteroidal mineralocorticoid receptor (MR) blocker esaxerenone has demonstrated good antihypertensive activity in a variety of patients, including those with uncomplicated grade I–III hypertension, hypertension with moderate renal dysfunction, hypertension with type 2 diabetes mellitus with albuminuria, and hypertension associated with primary aldosteronism. Hyperkalemia has long been recognized as a potential side effect occurring during treatment with MR blockers, but there is a lack of understanding and guidance about the appropriate management of hyperkalemia during antihypertensive therapy with MR blockers, especially in regard to the newer agent esaxerenone. In this article, we first highlight risk factors for hyperkalemia, including advanced chronic kidney disease, diabetes mellitus, cardiovascular disease, age, and use of renin-angiotensin-aldosterone system inhibitors. Next, we examine approaches to prevention and management, including potassium monitoring, diet, and the use of appropriate therapeutic techniques. Finally, we summarize the currently available data for esaxerenone and hyperkalemia. Proper management of serum potassium is required to ensure safe clinical use of MR blockers, including awareness of at-risk patient groups, choosing appropriate dosages for therapy initiation and dosage titration, and monitoring of serum potassium during therapy. It is critical that physicians take such factors into consideration to optimize MR blocker therapy in patients with hypertension.

Rates of hyperkalemia after publication of the Randomized Aldactone Evaluation Study.

Alexander Kopp,  Belinda Lee,  David Juurlink … (2004)
The Randomized Aldactone Evaluation Study (RALES) demonstrated that spironolactone significantly improves outcomes in patients with severe heart failure. Use of angiotensin-converting-enzyme (ACE) inhibitors is also indicated in these patients. However, life-threatening hyperkalemia can occur when these drugs are used together. We conducted a population-based time-series analysis to examine trends in the rate of spironolactone prescriptions and the rate of hospitalization for hyperkalemia in ambulatory patients before and after the publication of RALES. We linked prescription-claims data and hospital-admission records for more than 1.3 million adults 66 years of age or older in Ontario, Canada, for the period from 1994 through 2001. Among patients treated with ACE inhibitors who had recently been hospitalized for heart failure, the spironolactone-prescription rate was 34 per 1000 patients in 1994, and it increased immediately after the publication of RALES, to 149 per 1000 patients by late 2001 (P<0.001). The rate of hospitalization for hyperkalemia rose from 2.4 per 1000 patients in 1994 to 11.0 per 1000 patients in 2001 (P<0.001), and the associated mortality rose from 0.3 per 1000 to 2.0 per 1000 patients (P<0.001). As compared with expected numbers of events, there were 560 (95 percent confidence interval, 285 to 754) additional hyperkalemia-related hospitalizations and 73 (95 percent confidence interval, 27 to 120) additional hospital deaths during 2001 among older patients with heart failure who were treated with ACE inhibitors in Ontario. Publication of RALES was not associated with significant decreases in the rates of readmission for heart failure or death from all causes. The publication of RALES was associated with abrupt increases in the rate of prescriptions for spironolactone and in hyperkalemia-associated morbidity and mortality. Closer laboratory monitoring and more judicious use of spironolactone may reduce the occurrence of this complication. Copyright 2004 Massachusetts Medical Society

2013 ACCF/AHA Guideline for the Management of Heart Failure