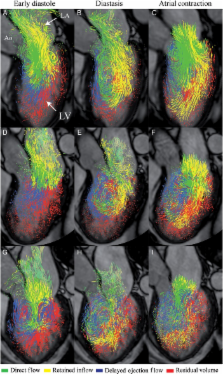 Patients with mild heart failure (HF) who are clinically compensated may have normal left ventricular (LV) stroke volume (SV). Despite this, altered intra-ventricular flow patterns have been recognized in these subjects. We hypothesized that, compared with normal LVs, flow in myopathic LVs would demonstrate a smaller proportion of inflow volume passing directly to ejection and diminished the end-diastolic preservation of the inflow kinetic energy (KE).

In 10 patients with dilated cardiomyopathy (DCM) (49 ± 14 years, six females) and 10 healthy subjects (44 ± 17 years, four females), four-dimensional MRI velocity and morphological data were acquired. A previously validated method was used to separate the LV end-diastolic volume (EDV) into four flow components based on the blood's locations at the beginning and end of the cardiac cycle. KE was calculated over the cardiac cycle for each component. The EDV was larger ( P = 0.021) and the ejection fraction smaller ( P < 0.001) in DCM compared with healthy subjects; the SV was equivalent (DCM: 77 ± 19, healthy: 79 ± 16 mL). The proportion of the total LV inflow that passed directly to ejection was smaller in DCM ( P = 0.000), but the end-diastolic KE/mL of the direct flow was not different in the two groups (NS).

Despite equivalent LVSVs, HF patients with mild LV remodelling demonstrate altered diastolic flow routes through the LV and impaired preservation of inflow KE at pre-systole compared with healthy subjects. These unique flow-specific changes in the flow route and energetics are detectable despite clinical compensation, and may prove useful as subclinical markers of LV dysfunction.

Rebecca McMurray,  Philip Stewart,  S Capewell … (2001)
The prognostic impact of heart failure relative to that of 'high-profile' disease states such as cancer, within the whole population, is unknown. All patients with a first admission to any Scottish hospital in 1991 for heart failure, myocardial infarction or the four most common types of cancer specific to men and women were identified. Five-year survival rates and associated loss of expected life-years were then compared. In 1991, 16224 men had an initial hospitalisation for heart failure (n=3241), myocardial infarction (n=6932) or cancer of the lung, large bowel, prostate or bladder (n=6051). Similarly, 14842 women were admitted for heart failure (n=3606), myocardial infarction (n=4916), or cancer of the breast, lung, large bowel or ovary (n=6320). With the exception of lung cancer, heart failure was associated with the poorest 5-year survival rate (approximately 25% for both sexes). On an adjusted basis, heart failure was associated with worse long-term survival than bowel cancer in men (adjusted odds ratio, 0.89; 95% CI, 0.82-0.97; P<0.01) and breast cancer in women (odds ratio, 0.59; 95% CI, 0.55-0.64; P<0.001). The overall population rate of expected life-years lost due to heart failure in men was 6.7 years/1000 and for women 5.1 years/1000. With the notable exception of lung cancer, heart failure is as 'malignant' as many common types of cancer and is associated with a comparable number of expected life-years lost.

Asymmetric redirection of flow through the heart.

D Firmin,  P Kilner,  R Mohiaddin … (2000)
Through cardiac looping during embryonic development, paths of flow through the mature heart have direction changes and asymmetries whose topology and functional significance remain relatively unexplored. Here we show, using magnetic resonance velocity mapping, the asymmetric redirection of streaming blood in atrial and ventricular cavities of the adult human heart, with sinuous, chirally asymmetric paths of flow through the whole. On the basis of mapped flow fields and drawings that illustrate spatial relations between flow paths, we propose that asymmetries and curvatures of the looped heart have potential fluidic and dynamic advantages. Patterns of atrial filling seem to be asymmetric in a manner that allows the momentum of inflowing streams to be redirected towards atrio-ventricular valves, and the change in direction at ventricular level is such that recoil away from ejected blood is in a direction that can enhance rather than inhibit ventriculo-atrial coupling. Chiral asymmetry might help to minimize dissipative interaction between entering, recirculating and outflowing streams. These factors might combine to allow a reciprocating, sling-like, 'morphodynamic' mode of action to come into effect when heart rate and output increase during exercise.

The online version of this article has been published under an open access model. Users are entitled to use, reproduce, disseminate, or display the open access version of this article for non-commercial purposes provided that the original authorship is properly and fully attributed; the Journal, Learned Society and Oxford University Press are attributed as the original place of publication with correct citation details given; if an article is subsequently reproduced or disseminated not in its entirety but only in part or as a derivative work this must be clearly indicated. For commercial re-use, please contact journals.permissions@oup.com