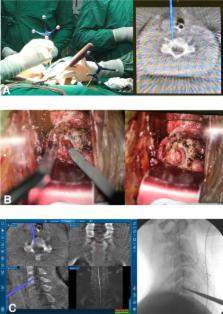 Introduction: Precise targeted excision of the C5–C6 osteoid osteoma with placement of reference array on clavicle with minimal disturbance of anatomy and motion.

Methods: A 20-year-old male presented with an osteoid osteoma in the superior end plate of the C6 vertebra abutting the spinal canal causing intractable pain. The authors curetted the nidus using a 3D C-arm-based intraoperative scan integrated with an optical navigation system through a minimal access anterior cervical exposure. The patient reference array was affixed to the left clavicle using a threaded pin.

Results: The postoperative CT-scan revealed complete excision. Follow-up MRI and CT after 12 months revealed C5–C6 intervertebral disc to be intact without evidence of any tumor recurrence. VAS for neck pain improved from 8/10 to 2/10 immediately postoperatively and 0/10 at 1 year follow-up with no limitation of cervical movement. A motion segment was preserved with this technique.

Conclusions: Navigation allowed safe curettage of the nidus with minimal disturbance to the anatomy and motion. The site of attachment of patient reference array on clavicle can be recommended as stable, meeting all the criteria for optimal accuracy and stability.

J Kneisl, M. Simon (1992)
Twenty-four patients were evaluated and diagnosed, between August 1975 and July 1989, as having probable osteoid-osteoma. Fifteen patients had operative treatment (twelve immediate and three delayed); all fifteen had complete relief of pain. The remaining nine patients were treated with non-steroidal anti-inflammatory medications; all nine had complete relief of pain, and six had resolution of the symptoms without using non-steroidal anti-inflammatory drugs, after an average of thirty-three months (range, thirty to forty months) of treatment. Thus, long-term administration of non-steroidal anti-inflammatory drugs can often be as effective as excision for the treatment of osteoid-osteoma, without the morbidity that is associated with the operation, especially in patients in whom operative treatment would be complex or might lead to disability.

P. Bonnevialle, T Jarlaud, Francisco Girón … (1999)
To reevaluate at medium term the results of computed tomography (CT)-guided percutaneous resection of osteoid osteomas. Thirty-eight patients who had undergone treatment by means of this technique were reexamined with a mean follow-up of 3.7 years. The short- and medium-term clinical course and histologic features of the resection specimens were analyzed. The bone fragment could be analyzed in all cases, and the diagnosis of osteoid osteoma was confirmed in 28 patients (74%). A different diagnosis was made in six patients: mucoid cyst, subchondral arthritic geode, fibrous dysplastic lesion, focal osteochondritis, or focal chronic osteomyelitis. Cure was obtained in 32 patients (84%), whatever the cause. Complications, generally minor and transient, were observed in nine patients (24%). The most severe complications were two femoral fractures and one focal chronic osteomyelitis due to Staphylococcus aureus infection. The results of this study confirm the efficacy of percutaneous resection of osteoid osteomas and the possibility of using this method for successful treatment of other small bone lesions.