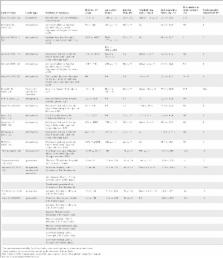 A total of 18 studies (2 randomized controlled trials, 5 prospective studies, and 11 retrospective studies) with a total of 135,734 rAAA patients were included. rAAA patients who underwent EVAR had significantly lower peri-operative mortality compared to those who underwent OSR (overall OR = 0.62, 95% CI = 0.58 to 0.67, P<0.001). rAAA patients with EVAR also had a significantly shorter mean length of hospital stay compared to those with OSR (difference in mean length of stay ranged from −2.00 to −19.10 days, with the overall estimate being −5.25 days (95% CI = −9.23 to −1.26, P = 0.010). There was no publication bias and sensitivity analysis showed good reliability.

EVAR confers significant benefits in terms of peri-operative mortality and length of hospital stay. There is a need for more randomized controlled trials to compare outcomes of EVAR and OSR for rAAA.

Estimating the mean and variance from the median, range, and the size of a sample

Stela Pudar Hozo,  Benjamin Djulbegovic,  Iztok Hozo (2005)
Background Usually the researchers performing meta-analysis of continuous outcomes from clinical trials need their mean value and the variance (or standard deviation) in order to pool data. However, sometimes the published reports of clinical trials only report the median, range and the size of the trial. Methods In this article we use simple and elementary inequalities and approximations in order to estimate the mean and the variance for such trials. Our estimation is distribution-free, i.e., it makes no assumption on the distribution of the underlying data. Results We found two simple formulas that estimate the mean using the values of the median (m), low and high end of the range (a and b, respectively), and n (the sample size). Using simulations, we show that median can be used to estimate mean when the sample size is larger than 25. For smaller samples our new formula, devised in this paper, should be used. We also estimated the variance of an unknown sample using the median, low and high end of the range, and the sample size. Our estimate is performing as the best estimate in our simulations for very small samples (n ≤ 15). For moderately sized samples (15 70), the formula range/6 gives the best estimator for the standard deviation (variance). We also include an illustrative example of the potential value of our method using reports from the Cochrane review on the role of erythropoietin in anemia due to malignancy. Conclusion Using these formulas, we hope to help meta-analysts use clinical trials in their analysis even when not all of the information is available and/or reported.

David Epstein (2010)
Few data are available on the long-term outcome of endovascular repair of abdominal aortic aneurysm as compared with open repair. From 1999 through 2004 at 37 hospitals in the United Kingdom, we randomly assigned 1252 patients with large abdominal aortic aneurysms (> or = 5.5 cm in diameter) to undergo either endovascular or open repair; 626 patients were assigned to each group. Patients were followed for rates of death, graft-related complications, reinterventions, and resource use until the end of 2009. Logistic regression and Cox regression were used to compare outcomes in the two groups. The 30-day operative mortality was 1.8% in the endovascular-repair group and 4.3% in the open-repair group (adjusted odds ratio for endovascular repair as compared with open repair, 0.39; 95% confidence interval [CI], 0.18 to 0.87; P=0.02). The endovascular-repair group had an early benefit with respect to aneurysm-related mortality, but the benefit was lost by the end of the study, at least partially because of fatal endograft ruptures (adjusted hazard ratio, 0.92; 95% CI, 0.57 to 1.49; P=0.73). By the end of follow-up, there was no significant difference between the two groups in the rate of death from any cause (adjusted hazard ratio, 1.03; 95% CI, 0.86 to 1.23; P=0.72). The rates of graft-related complications and reinterventions were higher with endovascular repair, and new complications occurred up to 8 years after randomization, contributing to higher overall costs. In this large, randomized trial, endovascular repair of abdominal aortic aneurysm was associated with a significantly lower operative mortality than open surgical repair. However, no differences were seen in total mortality or aneurysm-related mortality in the long term. Endovascular repair was associated with increased rates of graft-related complications and reinterventions and was more costly. (Current Controlled Trials number, ISRCTN55703451.) 2010 Massachusetts Medical Society

R M Greenhalgh,  L Brown,  G Kwong … (2015)
Endovascular aneurysm repair (EVAR) is a new technology to treat patients with abdominal aortic aneurysm (AAA) when the anatomy is suitable. Uncertainty exists about how endovascular repair compares with conventional open surgery. EVAR trial 1 was instigated to compare these treatments in patients judged fit for open AAA repair. Between 1999 and 2003, 1082 elective (non-emergency) patients were randomised to receive either EVAR (n=543) or open AAA repair (n=539). Patients aged at least 60 years with aneurysms of diameter 5.5 cm or more, who were fit enough for open surgical repair (anaesthetically and medically well enough for the procedure), were recruited for the study at 41 British hospitals proficient in the EVAR technique. The primary outcome measure is all-cause mortality and these results will be released in 2005. The primary analysis presented here is operative mortality by intention to treat and a secondary analysis was done in per-protocol patients. Patients (983 men, 99 women) had a mean age of 74 years (SD 6) and mean AAA diameter of 6.5 cm (SD 1). 1047 (97%) patients underwent AAA repair and 1008 (93%) received their allocated treatment. 30-day mortality in the EVAR group was 1.7% (9/531) versus 4.7% (24/516) in the open repair group (odds ratio 0.35 [95% CI 0.16-0.77], p=0.009). By per-protocol analysis, 30-day mortality for EVAR was 1.6% (8/512) versus 4.6% (23/496) for open repair (0.33 [0.15-0.74], p=0.007). Secondary interventions were more common in patients allocated EVAR (9.8% vs 5.8%, p=0.02). In patients with large AAAs, treatment by EVAR reduced the 30-day operative mortality by two-thirds compared with open repair. Any change in clinical practice should await durability and longer term results.