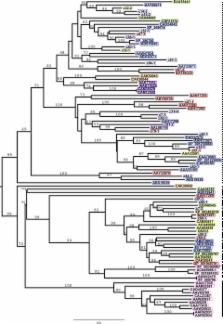 Ericoid mycorrhizal fungi (ERM) may specialize in capturing nutrients from their host's litter as a strategy for regulating nutrient cycles in terrestrial ecosystems. In spite of their potential significance, we know little about the structure of ERM fungal communities and the genetic basis of their saprotrophic traits (e.g., genes encoding extracellular enzymes). Rhododendron maximum is a model ERM understory shrub that influences the nutrient cycles of montane hardwood forests in the southern Appalachians (North Carolina, USA). We sampled ERM roots of R. maximum from organic and mineral soil horizons and identified root fungi by amplifying and sequencing internal transcribed spacer (ITS) ribosomal DNA (rDNA) collected from cultures and clones. We observed 71 fungal taxa on ERM roots, including known symbionts Rhizoscyphus ericae and Oidiodendron maius, putative symbionts from the Helotiales, Chaetothyriales, and Sebacinales, ectomycorrhizal symbionts, and saprotrophs. Supporting the idea that ERM fungi are adept saprotrophs, richness of root-fungi was greater in organic than in mineral soil horizons. To study the genetic diversity of oxidative enzymes that contribute to decomposition, we amplified and sequenced a portion of genes encoding multicopper oxidases (MCOs) from ERM ascomycetes. Most fungi possessed multiple copies of MCO sequences with strong similarities to known ferroxidases and laccases. Our findings indicate that R. maximum associates with a taxonomically and ecologically diverse fungal community. The study of MCO gene diversity and expression may be useful for understanding how ERM root fungi regulate the cycling of nutrients between the host plant and the soil environment.

Leroy R. Thacker,  P Hoegger,  Ursula Kües … (2006)
A phylogenetic analysis of more than 350 multicopper oxidases (MCOs) from fungi, insects, plants, and bacteria provided the basis for a refined classification of this enzyme family into laccases sensu stricto (basidiomycetous and ascomycetous), insect laccases, fungal pigment MCOs, fungal ferroxidases, ascorbate oxidases, plant laccase-like MCOs, and bilirubin oxidases. Within the largest group of enzymes, formed by the 125 basidiomycetous laccases, the gene phylogeny does not strictly follow the species phylogeny. The enzymes seem to group at least partially according to the lifestyle of the corresponding species. Analyses of the completely sequenced fungal genomes showed that the composition of MCOs in the different species can be very variable. Some species seem to encode only ferroxidases, whereas others have proteins which are distributed over up to four different functional clusters in the phylogenetic tree.

B Cerabolini,  M Werger,  R Aerts … (2001)
Ecosystem carbon cycling depends strongly on the productivity of plant species and the decomposition rates of the litter they produce. We tested the hypothesis that classifying plant functional types according to mycorrhizal association explains important interspecific variation in plant carbon cycling traits, particularly in those traits that feature in a hypothesized feedback between vegetation productivity and litter turnover. We compared data from standardized 'screening' tests on inherent potential seedling relative growth rate (RGR), foliar nutrient concentrations, and leaf litter decomposability among 83 British plant species of known mycorrhizal type. There was important variation in these parameters between mycorrhizal plant types. Plant species with ericoid mycorrhiza showed consistently low inherent RGR, low foliar N and P concentrations, and poor litter decomposability; plant species with ectomycorrhiza had an intermediate RGR, higher foliar N and P, and intermediate to poor litter decomposability; plant species with arbuscular-mycorrhiza showed comparatively high RGR, high foliar N and P, and fast litter decomposition. Within the woody species subset, differentiation in RGR between mycorrhizal types was mostly confounded with deciduous versus evergreen habit, but the overall differentiation in litter mass loss between mycorrhizal types remained strong within each leaf habit. These results indicate that, within a representative subset of a temperate flora, ericoid and ectomycorrhizal strategies are linked with low and arbuscular-mycorrhizal species with high ecosystem carbon turnover. The incorporation of mycorrhizal association into current functional type classifications is a valuable tool in the assessment of plant-mediated controls on carbon and nutrient cycling.

This is an open access article under the terms of the Creative Commons Attribution Non Commercial License, which permits use, distribution and reproduction in any medium, provided the original work is properly cited and is not used for commercial purposes.