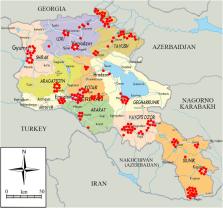 Background: In 2016, a field study was implemented in all Armenian provinces in order to update knowledge on the presence and distribution of both native and invasive mosquito species. Larvae and adult mosquitoes were sampled and identified on the basis of their morphology. Supplementary field surveys were performed in 2017–2018. Results: Between June 20 and July 12, 2016, 117 localities were visited. A total number of 197 sampling units were checked, of which 143 (73%) were positive for mosquitoes (with 1–6 species per sampling unit). A total number of 4157 mosquito specimens were identified to species or species complex level. Ten species represent first records for Armenia: Aedes albopictus, Ae. annulipes, Ae. cataphylla, Ae. cinereus/geminus (probably Ae. cinereus) , Ae. flavescens, Anopheles plumbeus, Coquillettidia richiardii, Culex martinii, Cx. torrentium and Culiseta subochrea. The invasive species Ae. albopictus was recorded in a single locality (Bagratashen) at the border point with Georgia, along the main road Tbilisi-Yerevan. This species was further recorded in 2017 and 2018, demonstrating its establishment and spread in north Armenia. These surveys confirm the presence of vectors of malaria parasites (in particular An. sacharovi) and West Nile virus ( Cx. pipiens). Conclusion: The knowledge of the Armenian mosquito fauna is extended to a list of 28 species. The record of Aedes albopictus, an important potential vector of many arboviruses, has important implications for public health.

Spread of the Invasive Mosquitoes Aedes aegypti and Aedes albopictus in the Black Sea Region Increases Risk of Chikungunya, Dengue, and Zika Outbreaks in Europe

Host preferences in host-seeking and blood-fed mosquitoes in Switzerland.

A Schönenberger,  S Wagner,  H Tuten … (2016)
The avian zoonotic agent for West Nile virus (WNV) can cause neuroinvasive disease in horses and humans and is expanding its range in Europe. Analyses of the risk for transmission to these hosts in non-endemic areas are necessary. Host preferences of mosquitoes (Diptera: Culicidae), the main vectors of WNV, were determined in Switzerland using animal-baited trap (horse, chickens) experiments at a natural and a periurban site. This was undertaken on four occasions during May-September 2014. In addition, the hosts of 505 blood-fed mosquitoes collected in a zoo and in the field were determined. Mosquito data obtained in the animal bait experiments were corrected for host weight and body surface area and by Kleiber's scaling factor. Collections of 11-14 different mosquito species were achieved with these approaches. Statistically significant host preferences were identified in three species in both approaches. The other species showed opportunistic feeding behaviours to varying extents. Specifically, the invasive species Hulecoeteomyia japonica (= Aedes japonicus) was identified for the first time as feeding on avians in nature. Abundance data, spatiotemporal activity and laboratory vector competence for WNV suggested that, in addition to the main WNV vector Culex pipiens, H. japonica and Aedimorphus vexans (= Aedes vexans) are the most likely candidate bridge vectors for WNV transmission in Switzerland.