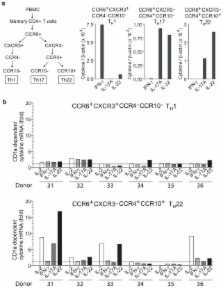 CD1 activates T cells, but the functions and size of possible human T cell repertoires recognizing each of the CD1 antigen presenting molecules remain unknown. Using an experimental system that bypasses major histocompatibility complex (MHC) restriction and the requirement for defined antigens, we found that polyclonal T cells responded at higher rates to cells expressing CD1a compared to CD1b, CD1c or CD1d. Unlike invariant NKT cells, the CD1a-autoreactive repertoire contains diverse T cell receptors. Functionally, many CD1a-autoreactive T cells home to skin, where they produce interleukin 22 (IL-22) in response to CD1a on Langerhans cells. The strong and frequent responses among genetically diverse donors define CD1a-autoreactive cells as a normal part of the human T cell repertoire and CD1a as a target of T H22 cells.

Production of interleukin 22 but not interleukin 17 by a subset of human skin-homing memory T cells.

Rebekka Geiger,  Thomas Duhen,  David Jarrossay … (2009)
Interleukin 22 (IL-22) is a cytokine produced by the T(H)-17 lineage of helper T cells and NK-22 subset of natural killer cells that acts on epithelial cells and keratinocytes and has been linked to skin homeostasis and inflammation. Here we characterize a population of human skin-homing memory CD4(+) T cells that expressed the chemokine receptors CCR10, CCR6 and CCR4 and produced IL-22 but neither IL-17 nor interferon-gamma (IFN-gamma). Clones isolated from this population produced IL-22 only and had low or undetectable expression of the T(H)-17 and T helper type 1 (T(H)1) transcription factors RORgammat and T-bet. The differentiation of T cells producing only IL-22 was efficiently induced in naive T cells by plasmacytoid dendritic cells in an IL-6- and tumor necrosis factor-dependent way. Our findings delineate a previously unknown subset of human CD4(+) effector T cells dedicated to skin pathophysiology.

SP Balk,  MB Brenner,  S Porcelli (1993)
CD4-CD8- (double negative [DN]) alpha/beta T cells are a largely uncharacterized subpopulation of unknown function. To investigate whether these cells are selected to recognize particular antigens or antigen-presenting molecules, DN alpha/beta T cells were purified from the peripheral blood of five normal donors and their T cell receptor (TCR) alpha and beta chains were examined. Random cloning of TCR alpha chains by single-sided polymerase chain reaction (PCR) amplification identified an invariant rearrangement between V alpha 24 and J alpha Q, with no N region diversity, which was expressed preferentially by DN alpha/beta T cells from all donors. Random cloning also identified a precise V alpha 7.2-J alpha (IGRJa14) rearrangement, with two variable amino acids encoded in the V-J junction, which was enriched in the DN alpha/beta T cell preparations from some, but not all, donors. Analysis of TCR beta chains by quantitative PCR amplification demonstrated that the expression of four V beta gene families, V beta 2, 8, 11, and 13, was markedly increased in these DN alpha/beta T cell preparations. The expression of particular TCRs by DN alpha/beta T cells from multiple donors indicates that these cells, or at least a subpopulation of cells with this phenotype, recognize a limited spectrum of antigens and suggests that they may use nonpolymorphic antigen-presenting molecules.