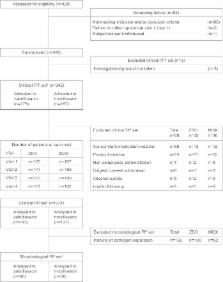 Airways microbial flora in COPD patients in stable clinical conditions and during exacerbations: a bronchoscopic investigation.

I. Pelá,  F Marchesani,  C Agostinelli … (1998)
Patients affected with chronic obstructive pulmonary disease (COPD) undergo frequent exacerbations of their illness characterized by increased cough and expectoration. The precise aetiology of these episodes often remains unknown. In the absence of clinical or radiographic signs of pneumonia, bacterial or viral cultures of sputum usually provide little useful information. Thus, we performed fibreoptic bronchoscopy using a protected specimen brush (PSB) to obtain uncontaminated secretions for culture from 56 patients with COPD, 16 with stable clinical conditions and 40 affected with exacerbations of the disease. The aim of our study was to evaluate bronchial microbial flora by quantitative aerobic and anaerobic culture of each specimen. Twenty five subjects (45%), 4 (16%) in stable state and 21 (84%) with COPD exacerbations, had specimens which gave rise to significant bacterial growth (> 10(3) colony forming units.mL-1). The predominant bacteria were Streptococcus pneumoniae (in 10 cases) and alpha-haemolytic streptococci (in 6 cases); other bacteria found were coagulase-negative staphylococci and Branhamella catarralis in (2 cases each), and Proteus mirabilis, Haemophilus influenzae, Pseudomonas aeruginosa, Aerococcus viridans and Chromobacterium violaceum (each in a single case only). Although significant bacterial growth was more frequently found in patients with chronic obstructive pulmonary disease exacerbations and in those with a higher degree of bronchial inflammation, the differences between the two groups of patients were not statistically significant. Nevertheless, the results obtained in our study confirm the validity of and the need for reliable sampling methods (like the protected specimen brush) to demonstrate significant bacterial colonization of the airways in chronic obstructive pulmonary disease patients.

In vitro and in vivo antibacterial activities of DW-224a, a new fluoronaphthyridone.