Low-density lipoprotein cholesterol of less than 70 mg/dL is associated with fewer cardiovascular events in acute coronary syndrome patients: a real-life cohort in Thailand 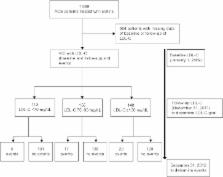 Elevated low-density lipoprotein cholesterol (LDL-C) is associated with an increased risk of cardiovascular disease or mortality; however, the LDL-C goal for therapy in acute coronary syndrome (ACS) patients is controversial and varies among guidelines. This study aimed to assess the effect of reaching an LDL-C goal of <70 mg/dL (<1.8 mmol/L) on first composite cardiovascular outcomes in routine clinical practice in Thailand.

A retrospective cohort study was conducted using medical charts and the electronic hospital database of patients diagnosed with ACS and treated with statins at a tertiary care hospital in Thailand between 2009 and 2012. After admission, patients were followed from the date of LDL-C goal assessment until the first event of composite cardiovascular outcomes (nonfatal ACS, nonfatal stroke, or all-cause death). Cox proportional hazard models adjusted for potential confounders were used.

ACS patients who received statins and achieved an LDL-C of <70 mg/dL had significantly fewer composite cardiovascular outcomes, confirming “the lower the better” and the benefit of treating to LDL-C target in ACS patient management.

Craig Olsson,  B Chaitman,  Alex Stern … (2001)
Patients experience the highest rate of death and recurrent ischemic events during the early period after an acute coronary syndrome, but it is not known whether early initiation of treatment with a statin can reduce the occurrence of these early events. To determine whether treatment with atorvastatin, 80 mg/d, initiated 24 to 96 hours after an acute coronary syndrome, reduces death and nonfatal ischemic events. A randomized, double-blind trial conducted from May 1997 to September 1999, with follow-up through 16 weeks at 122 clinical centers in Europe, North America, South Africa, and Australasia. A total of 3086 adults aged 18 years or older with unstable angina or non-Q-wave acute myocardial infarction. Patients were stratified by center and randomly assigned to receive treatment with atorvastatin (80 mg/d) or matching placebo between 24 and 96 hours after hospital admission. Primary end point event defined as death, nonfatal acute myocardial infarction, cardiac arrest with resuscitation, or recurrent symptomatic myocardial ischemia with objective evidence and requiring emergency rehospitalization. A primary end point event occurred in 228 patients (14.8%) in the atorvastatin group and 269 patients (17.4%) in the placebo group (relative risk [RR], 0.84; 95% confidence interval [CI], 0.70-1.00; P =.048). There were no significant differences in risk of death, nonfatal myocardial infarction, or cardiac arrest between the atorvastatin group and the placebo group, although the atorvastatin group had a lower risk of symptomatic ischemia with objective evidence and requiring emergency rehospitalization (6.2% vs 8.4%; RR, 0.74; 95% CI, 0.57-0.95; P =.02). Likewise, there were no significant differences between the atorvastatin group and the placebo group in the incidence of secondary outcomes of coronary revascularization procedures, worsening heart failure, or worsening angina, although there were fewer strokes in the atorvastatin group than in the placebo group (12 vs 24 events; P =.045). In the atorvastatin group, mean low-density lipoprotein cholesterol level declined from 124 mg/dL (3.2 mmol/L) to 72 mg/dL (1.9 mmol/L). Abnormal liver transaminases (>3 times upper limit of normal) were more common in the atorvastatin group than in the placebo group (2.5% vs 0.6%; P<.001). For patients with acute coronary syndrome, lipid-lowering therapy with atorvastatin, 80 mg/d, reduces recurrent ischemic events in the first 16 weeks, mostly recurrent symptomatic ischemia requiring rehospitalization.

Adherence with statin therapy in elderly patients with and without acute coronary syndromes.

Cynthia Jackevicius,  Muhammad Mamdani,  Jack V Tu (2015)
Landmark clinical trials have demonstrated the survival benefits of statins, with benefits usually starting after 1 to 2 years of treatment. Research prior to these trials of older lipid-lowering agents demonstrated low levels of 1-year adherence. To compare 2-year adherence following statin initiation in 3 cohorts of patients: those with recent acute coronary syndrome (ACS), those with chronic coronary artery disease (CAD), and those without coronary disease (primary prevention). Cohort study using linked population-based administrative data from Ontario. All patients aged 66 years or older who received at least 1 statin prescription between January 1994 and December 1998 and who did not have a statin prescription in the prior year were followed up for 2 years from their first statin prescription. There were 22,379 patients in the ACS, 36,106 in the chronic CAD, and 85,020 in the primary prevention cohorts. Adherence to statins, defined as a statin being dispensed at least every 120 days after the index prescription for 2 years. Two-year adherence rates in the cohorts were only 40.1% for ACS, 36.1% for chronic CAD, and 25.4% for primary prevention. Relative to the ACS cohort, nonadherence was more likely among patients receiving statins in the chronic CAD (relative risk [RR], 1.14; 95% CI, 1.11-1.16) and primary prevention cohorts (RR, 1.92; 95% CI, 1.87-1.96). Elderly patients with and without recent ACS have low rates of adherence to statins. This suggests that many patients initiating statin therapy may receive no or limited benefit from statins because of premature discontinuation.