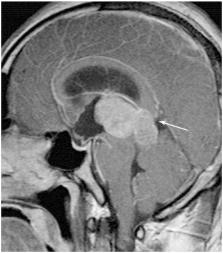 The corpus callosum (CC) is the largest white matter structure in the brain, consisting of more than 200–250 million axons that provide a large connection mainly between homologous cerebral cortical areas in mirror image sites. The posterior end of the CC is the thickest part, which is called the splenium. Various diseases including congenital to acquired lesions including congenital anomalies, traumatic lesions, ischemic diseases, tumors, metabolic, toxic, degenerative, and demyelinating diseases, can involve the splenium of the CC and their clinical symptoms and signs are also variable. Therefore, knowledge of the disease entities and the imaging findings of lesions involving the splenium is valuable in clinical practice. MR imaging is useful for the detection and differential diagnosis of splenial lesions of the CC. In this study, we classify the disease entities and describe imaging findings of lesions involving the splenium of the CC based on our experiences and a review of the literature.

W Bartynski,  J Boardman (2007)
Although the term posterior reversible encephalopathy syndrome (PRES) was popularized because of the typical presence of vasogenic edema in the parietal and occipital lobes, other regions of the brain are also frequently affected. We evaluated lesion distribution with CT and MR in a large cohort of patients who experienced PRES to comprehensively assess the imaging patterns identified. The locations of the PRES lesion at toxicity were comprehensively identified and tabulated in 136 patients by CT (22 patients) and MR (114 patients) imaging including the hemispheric, basal ganglial, and infratentorial locations. Clinical associations along with presentation at toxicity including blood pressure were assessed. Vasogenic edema was consistently present in the parietal or occipital regions (98%), but other locations were common including the frontal lobes (68%), inferior temporal lobes (40%), and cerebellar hemispheres (30%). Involvement of the basal ganglia (14%), brain stem (13%), and deep white matter (18%) including the splenium (10%) was not rare. Three major patterns of PRES were noted: the holohemispheric watershed (23%), superior frontal sulcal (27%), and dominant parietal-occipital (22%), with additional common partial or asymmetric expression of these primary PRES patterns (28%). Involvement of the frontal lobe, temporal lobe, and cerebellar hemispheres is common in PRES, along with the occasional presence of lesions in the brain stem, basal ganglia, deep white matter, and splenium. Three primary PRES patterns are noted in the cerebral hemispheres, along with frequent partial or asymmetric expression of these PRES patterns. Awareness of these patterns and variations is important to recognize PRES neurotoxicity more accurately when present.

Robert J. Dempsey,  M. Elizabeth Meyerand,  Baxter P. Rogers … (2002)
Disruption of the cytoskeletal network and axonal membranes characterizes diffuse axonal injury (DAI) in the first few hours after traumatic brain injury. Histologic abnormalities seen in DAI hypothetically decrease the diffusion along axons and increase the diffusion in directions perpendicular to them. DAI therefore is hypothetically associated in the short term with decreased diffusion anisotropy. We tested this hypothesis by measuring the diffusion characteristics of traumatized brain tissue with use of diffusion tensor MR imaging. Five patients with mild traumatic brain injuries and 10 control subjects were studied with CT, conventional MR imaging, and diffusion tensor imaging. All patients were examined within 24 hours of injury. In each participant, diffusion tensor indices from homologous normal-appearing white matter regions of both hemispheres were compared. These indices were also compared between homologous regions of each patient and the control group. In two patients, diffusion tensor images from the immediate post-trauma period were compared with those at 1 month follow-up. Patients displayed significant reduction of diffusion anisotropy in several regions compared with the homologous ones in the contralateral hemisphere. Such differences were not observed in the control subjects. Significant reduction of diffusion anisotropy was also detected when diffusion tensor results from the patients were compared with those of the controls. This reduction was often less evident 1 month after injury. White matter regions with reduced anisotropy are detected in the first 24 hours after traumatic brain injury. Therefore, diffusion tensor imaging may be a powerful technique for in vivo detection of DAI.

Seung-Koo Lee,  Dong Ik Kim,  Jinna Kim … (2015)
Congenital anomalies of the central nervous system (CNS) often demonstrate aberrant white matter connections, which may be better characterized with diffusion-tensor imaging (DTI) and fiber tractography (FT) than with conventional magnetic resonance (MR) imaging. DTI-FT demonstrates abnormal hemispheric fiber connections in callosal agenesis or acquired disease of the corpus callosum. Decreased anisotropy of white matter adjacent to the malformed cortex and an aberrant course of major fiber pathways due to dysplastic white matter are common findings in cortical dysplasia. Increased anisotropy of dysplastic gray matter in heterotopia supports the hypothesis that developing neurons migrate from the ependyma to the cortex with a radial growth pattern. In periventricular leukomalacia, DTI-FT demonstrates an intact corticospinal tract and decreased thalamocortical sensory connections, which are responsible for the spasticity of cerebral palsy owing to impairment of inhibitory function. Joubert syndrome comprises malformation of the cerebellar vermis and an aberrant connection between the cerebellum and the cerebral cortex via an elongated and abnormally shaped superior cerebellar peduncle, which are well visualized with DTI-FT. In developmental CNS disease, DTI-FT demonstrates additional findings beyond those seen with conventional MR imaging. Future studies will focus on determining the significance of the aberrant fiber connections and their relationships to the clinical manifestations of CNS anomalies. (c) RSNA, 2005.