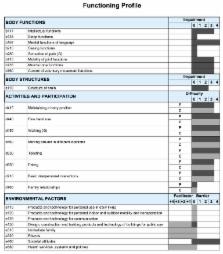 Introduction: The increase in the number of cases of microcephaly in Brazil and its association with the Zika virus (ZIKV) is a global public health problem. The International Classification of Functioning Disability and Health (ICF) model is a powerful tool and extremely relevant in managing disability. Objective: Describe the functioning profile of children with microcephaly associated with ZIKV in two states of northeastern Brazil. Methods: This is a descriptive cross-sectional study. The sociodemographic characteristics, head circumference, and other clinical data were collected from medical charts, physical examinations, measuring instruments, and interviews with the children and their parents. The Brazilian Portuguese version of the Brief Common ICF Core Set for cerebral palsy (CP) was used. Each ICF category was assigned a qualifier, which ranged from 0 to 4 (no problem, mild problem, moderate problem, severe problem, complete problem). For environmental factors, 0 represents no barrier and 4 represents complete barrier; +0, no facilitator and +4, complete facilitator. Results: A total of 34 children with microcephaly caused by ZIKV were recruited (18 girls and 16 boys) at four rehabilitation facilities in Rio Grande do Norte and Paraíba states, Brazil. The average age of the participants was 21 months, monthly income was ≈USD 300.00, and head circumference z-scores ranged between 0.92 and −5.51. The functioning profile revealed complete disability in most of the body function categories (b). The activity and participation areas (d) were highly impacted, particularly in mobility-related categories. With respect to environmental factors (e), most of the sample reported a complete facilitator for the immediate family, friends, and health services, systems, and policies, as well as a complete barrier to societal attitudes. Conclusion: This is the first study that describes the functioning profile of children with microcephaly associated with ZIKV, using a tool based on the ICF in Brazil. Our findings reinforce the need to maximize health care and access to information, based on the ICF, for multiprofessional teams, administrators, family members, and children.

Marta Maria G. Teixeira,  Maria da Conceição N. Costa,  Wanderson de Oliveira … (2016)
We describe the epidemic of microcephaly in Brazil, its detection and attempts to control it, the suspected causal link with Zika virus infection during pregnancy, and possible scenarios for the future. In October 2015, in Pernambuco, Brazil, an increase in the number of newborns with microcephaly was reported. Mothers of the affected newborns reported rashes during pregnancy and no exposure to other potentially teratogenic agents. Women delivering in October would have been in the first trimester of pregnancy during the peak of a Zika epidemic in March. By the end of 2015, 4180 cases of suspected microcephaly had been reported. Zika spread to other American countries and, in February 2016, the World Health Organization declared the Zika epidemic a public health emergency of international concern. This unprecedented situation underscores the urgent need to establish the evidence of congenital infection risk by gestational week and accrue knowledge. There is an urgent call for a Zika vaccine, better diagnostic tests, effective treatment, and improved mosquito-control methods.