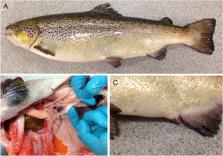 Farmed Atlantic salmon are one of the most economically significant global aquaculture products. Early sexual maturation of farmed males represents a significant challenge to this industry and has been linked with the vgll3 genotype. However, tools to aid research of this topic, such as all-male and clonal fish, are still lacking. The present 6-year study examined if all-male production is possible in Atlantic salmon, a species with heteromorphic sex chromosomes (males being XY, females XX), and if all-male fish can be applied to further explore the vgll3 contribution on the likelihood of early maturation.

Estrogen treatment of mixed sex yolk sac larvae gave rise to one sexually mature hermaphrodite with a male genotype (XY) that was used to produce both self-fertilized offspring and androgenetic double haploid (dh) offspring following egg activation with UV treated sperm and pressure shock to block the first mitotic division. There were YY supermales among both offspring types, which were crossed with dh females. Between 1 and 8% of the putative all-male offspring from the eight crosses with self-fertilized supermales were found to have ovaries, and 95% of these phenotypic females were also genetically female. None of the offspring from the one dh supermale cross had ovaries. When assessing the general contribution of the vgll3 locus on the likelihood of early post-smolt sexual maturation (jacking) in the all-male populations we found individuals that were homozygous for the early maturing genotype (97%) were more likely to enter puberty than individuals that were homozygous for the late maturing genotype (26%). However, the likelihood of jacking within individuals with an early/late heterozygous genotype was higher when the early allele came from the dam (94%) compared to the sire (45%).

The present results show that supermale Atlantic salmon are viable and fertile and can be used as a research tool to study important aspects of sexual maturation, such as to further explore the sex dependent parental genetic contribution to age at puberty in Atlantic salmon. In addition, we report the production of viable double haploid supermale fish.

Sex-dependent dominance at a single locus maintains variation in age at maturity in salmon.

Nicola Barson,  Tutku Aykanat,  Kjetil Hindar … (2015)
Males and females share many traits that have a common genetic basis; however, selection on these traits often differs between the sexes, leading to sexual conflict. Under such sexual antagonism, theory predicts the evolution of genetic architectures that resolve this sexual conflict. Yet, despite intense theoretical and empirical interest, the specific loci underlying sexually antagonistic phenotypes have rarely been identified, limiting our understanding of how sexual conflict impacts genome evolution and the maintenance of genetic diversity. Here we identify a large effect locus controlling age at maturity in Atlantic salmon (Salmo salar), an important fitness trait in which selection favours earlier maturation in males than females, and show it is a clear example of sex-dependent dominance that reduces intralocus sexual conflict and maintains adaptive variation in wild populations. Using high-density single nucleotide polymorphism data across 57 wild populations and whole genome re-sequencing, we find that the vestigial-like family member 3 gene (VGLL3) exhibits sex-dependent dominance in salmon, promoting earlier and later maturation in males and females, respectively. VGLL3, an adiposity regulator associated with size and age at maturity in humans, explained 39% of phenotypic variation, an unexpectedly large proportion for what is usually considered a highly polygenic trait. Such large effects are predicted under balancing selection from either sexually antagonistic or spatially varying selection. Our results provide the first empirical example of dominance reversal allowing greater optimization of phenotypes within each sex, contributing to the resolution of sexual conflict in a major and widespread evolutionary trade-off between age and size at maturity. They also provide key empirical evidence for how variation in reproductive strategies can be maintained over large geographical scales. We anticipate these findings will have a substantial impact on population management in a range of harvested species where trends towards earlier maturation have been observed.

John Bostock,  Brendan J McAndrew,  Randolph Richards … (2010)
Aquaculture contributed 43 per cent of aquatic animal food for human consumption in 2007 (e.g. fish, crustaceans and molluscs, but excluding mammals, reptiles and aquatic plants) and is expected to grow further to meet the future demand. It is very diverse and, contrary to many perceptions, dominated by shellfish and herbivorous and omnivorous pond fish either entirely or partly utilizing natural productivity. The rapid growth in the production of carnivorous species such as salmon, shrimp and catfish has been driven by globalizing trade and favourable economics of larger scale intensive farming. Most aquaculture systems rely on low/uncosted environmental goods and services, so a critical issue for the future is whether these are brought into company accounts and the consequent effects this would have on production economics. Failing that, increased competition for natural resources will force governments to allocate strategically or leave the market to determine their use depending on activities that can extract the highest value. Further uncertainties include the impact of climate change, future fisheries supplies (for competition and feed supply), practical limits in terms of scale and in the economics of integration and the development and acceptability of new bio-engineering technologies. In the medium term, increased output is likely to require expansion in new environments, further intensification and efficiency gains for more sustainable and cost-effective production. The trend towards enhanced intensive systems with key monocultures remains strong and, at least for the foreseeable future, will be a significant contributor to future supplies. Dependence on external feeds (including fish), water and energy are key issues. Some new species will enter production and policies that support the reduction of resource footprints and improve integration could lead to new developments as well as reversing decline in some more traditional systems.