Description of the male of Craugastor yucatanensis (Lynch, 1965) (Anura, Craugastoridae), its advertisement call, and additional data on females 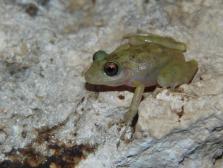 The male of Craugastor yucatanensis (Lynch, 1965) is described for the first time, as the original description was based on four females. The advertisement call is described and additional morphological data on females are presented. Also, information is provided on the sexual dimorphism and natural history of the species.

S Blair Hedges,  WILLIAM DUELLMAN,  MATTHEW P. HEINICKE (2008)
New World frogs recently placed in a single, enormous family (Brachycephalidae) have direct development and reproduce on land, often far away from water. DNA sequences from mitochondrial and nuclear genes of 344 species were analyzed to estimate their relationships. The molecular phylogeny in turn was used as the basis for a revised classification of the group. The 882 described species are placed in a new taxon, Terrarana, and allocated to four families, four subfamilies, 24 genera, 11 subgenera, 33 species series, 56 species groups, and 11 species subgroups. Systematic accounts are provided for all taxa above the species level. Two families (Craugastoridae and Strabomantidae), three subfamilies (Holoadeninae, Phyzelaphryninae, and Strabomantinae), six genera (Bryophryne, Diasporus, Haddadus, Isodactylus, Lynchius, and Psychrophrynella), and two subgenera (Campbellius and Schwartzius) are proposed and named as new taxa, 13 subspecies are considered to be distinct species, and 613 new combinations are formed. Most of the 100 informal groups (species series, species groups, and species subgroups) are new or newly defined. Brachycephalus and Ischnocnema are placed in Brachycephalidae, a relatively small clade restricted primarily to southeastern Brazil. Eleutherodactylidae includes two subfamilies, four genera, and five subgenera and is centered in the Caribbean region. Craugastoridae contains two genera and three subgenera and is distributed mainly in Middle America. Strabomantidae is distributed primarily in the Andes of northwestern South America and includes two subfamilies, 16 genera, and three subgenera. Images and distribution maps are presented for taxa above the species level and a complete list of species is provided. Aspects of the evolution, biogeography, and conservation of Terrarana are discussed.

Molecular systematics of terraranas (Anura: Brachycephaloidea) with an assessment of the effects of alignment and optimality criteria

Molecular systematics of terraranas (Anura: Brachycephaloidea) with an assessment of the effects of alignment and optimality criteria.

José M. Padial,  Taran Grant,  DARREL FROST (2014)
Brachycephaloidea is a monophyletic group of frogs with more than 1000 species distributed throughout the New World tropics, subtropics, and Andean regions. Recently, the group has been the target of multiple molecular phylogenetic analyses, resulting in extensive changes in its taxonomy. Here, we test previous hypotheses of phylogenetic relationships for the group by combining available molecular evidence (sequences of 22 genes representing 431 ingroup and 25 outgroup terminals) and performing a tree-alignment analysis under the parsimony optimality criterion using the program POY. To elucidate the effects of alignment and optimality criterion on phylogenetic inferences, we also used the program MAFFT to obtain a similarity-alignment for analysis under both parsimony and maximum likelihood using the programs TNT and GARLI, respectively. Although all three analytical approaches agreed on numerous points, there was also extensive disagreement. Tree-alignment under parsimony supported the monophyly of the ingroup and the sister group relationship of the monophyletic marsupial frogs (Hemiphractidae), while maximum likelihood and parsimony analyses of the MAFFT similarity-alignment did not. All three methods differed with respect to the position of Ceuthomantis smaragdinus (Ceuthomantidae), with tree-alignment using parsimony recovering this species as the sister of Pristimantis + Yunganastes. All analyses rejected the monophyly of Strabomantidae and Strabomantinae as originally defined, and the tree-alignment analysis under parsimony further rejected the recently redefined Craugastoridae and Pristimantinae. Despite the greater emphasis in the systematics literature placed on the choice of optimality criterion for evaluating trees than on the choice of method for aligning DNA sequences, we found that the topological differences attributable to the alignment method were as great as those caused by the optimality criterion. Further, the optimal tree-alignment indicates that insertions and deletions occurred in twice as many aligned positions as implied by the optimal similarity-alignment, confirming previous findings that sequence turnover through insertion and deletion events plays a greater role in molecular evolution than indicated by similarity-alignments. Our results also provide a clear empirical demonstration of the different effects of wildcard taxa produced by missing data in parsimony and maximum likelihood analyses. Specifically, maximum likelihood analyses consistently (81% bootstrap frequency) provided spurious resolution despite a lack of evidence, whereas parsimony correctly depicted the ambiguity due to missing data by collapsing unsupported nodes. We provide a new taxonomy for the group that retains previously recognized Linnaean taxa except for Ceuthomantidae, Strabomantidae, and Strabomantinae. A phenotypically diagnosable superfamily is recognized formally as Brachycephaloidea, with the informal, unranked name terrarana retained as the standard common name for these frogs. We recognize three families within Brachycephaloidea that are currently diagnosable solely on molecular grounds (Brachycephalidae, Craugastoridae, and Eleutherodactylidae), as well as five subfamilies (Craugastorinae, Eleutherodactylinae, Holoadeninae, Phyzelaphryninae, and Pristimantinae) corresponding in large part to previous families and subfamilies. Our analyses upheld the monophyly of all tested genera, but we found numerous subgeneric taxa to be non-monophyletic and modified the taxonomy accordingly.