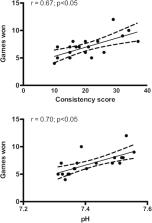 Journal: Journal of the International Society of Sports Nutrition

The efficacy of sodium citrate supplementation (SC) in exercise performance is unclear. Therefore, the aim of this study was to investigate the effect of SC on skilled tennis performance.

Effects of acute alkalosis and acidosis on performance: a meta-analysis.

Christopher J. Gore,  S Hopkins,  James A. Carr (2011)
Ingestion of agents that modify blood buffering action may affect high-intensity performance. Here we present a meta-analysis of the effects of acute ingestion of three such agents - sodium bicarbonate, sodium citrate and ammonium chloride - on performance and related physiological variables (blood bicarbonate, pH and lactate). A literature search yielded 59 useable studies with 188 observations of performance effects. To perform the mixed-model meta-analysis, all performance effects were converted into a percentage change in mean power and were weighted using standard errors derived from exact p-values, confidence limits (CLs) or estimated errors of measurement. The fixed effects in the meta-analytic model included the number of performance-test bouts (linear), test duration (log linear), blinding (yes/no), competitive status (athlete/nonathlete) and sex (male/female). Dose expressed as buffering mmoL/kg/body mass (BM) was included as a strictly proportional linear effect interacted with all effects except blinding. Probabilistic inferences were derived with reference to thresholds for small and moderate effects on performance of 0.5% and 1.5%, respectively. Publication bias was reduced by excluding study estimates with a standard error >2.7%. The remaining 38 studies and 137 estimates for sodium bicarbonate produced a possibly moderate performance enhancement of 1.7% (90% CL ± 2.0%) with a typical dose of 3.5 mmoL/kg/BM (∼0.3 g/kg/BM) in a single 1-minute sprint, following blinded consumption by male athletes. In the 16 studies and 45 estimates for sodium citrate, a typical dose of 1.5 mmoL/kg/BM (∼0.5 g/kg/BM) had an unclear effect on performance of 0.0% (±1.3%), while the five studies and six estimates for ammonium chloride produced a possibly moderate impairment of 1.6% (±1.9%) with a typical dose of 5.5 mmoL/kg/BM (∼0.3 g/kg/BM). Study and subject characteristics had the following modifying small effects on the enhancement of performance with sodium bicarbonate: an increase of 0.5% (±0.6%) with a 1 mmoL/kg/BM increase in dose; an increase of 0.6% (±0.4%) with five extra sprint bouts; a reduction of 0.6% (±0.9%) for each 10-fold increase in test duration (e.g. 1-10 minutes); reductions of 1.1% (±1.1%) with nonathletes and 0.7% (±1.4%) with females. Unexplained variation in effects between research settings was typically ±1.2%. The only noteworthy effects involving physiological variables were a small correlation between performance and pre-exercise increase in blood bicarbonate with sodium bicarbonate ingestion, and a very large correlation between the increase in blood bicarbonate and time between sodium citrate ingestion and exercise. The approximate equal and opposite effects of sodium bicarbonate and ammonium chloride are consistent with direct performance effects of pH, but sodium citrate appears to have some additional metabolic inhibitory effect. Important future research includes studies of sodium citrate ingestion several hours before exercise and quantification of gastrointestinal symptoms with sodium bicarbonate and citrate. Although individual responses may vary, we recommend ingestion of 0.3-0.5 g/kg/BM sodium bicarbonate to improve mean power by 1.7% (±2.0%) in high-intensity races of short duration.

David John Bishop,  Carmel Goodman,  Jennifer Davis … (2004)
The purpose of this study was to assess the effects of induced metabolic alkalosis, via sodium bicarbonate (NaHCO3) ingestion, on muscle metabolism and power output during repeated short-duration cycle sprints. : Ten active females (mean +/- SD: age = 19 +/- 2 yr, VO2max = 41.0 +/- 8.8 mL x kg x min ) ingested either 0.3 g x kg NaHCO3 or 0.207 g x kg of NaCl (CON), in a double-blind, random, counterbalanced order, 90 min before performing a repeated-sprint ability (RSA) test (5 x 6-s all-out cycle sprints every 30 s). Compared with CON, there was a significant increase in resting blood bicarbonate concentration [HCO3] (23.6 +/- 1.1 vs 30.0 +/- 3.0 mmol x L ) and pH (7.42 +/- 0.02 vs 7.50 +/- 0.04), but no significant difference in resting lactate concentration [La] (0.8 +/- 0.2 vs 0.8 +/- 0.3 mmol x L ) during the NaHCO3 trial. Muscle biopsies revealed no significant difference in resting muscle [La], pH, or buffer capacity (beta(in vitro)) between trials (P > 0.05). Compared with CON, the NaHCO3 trial resulted in a significant increase in total work (15.7 +/- 3.0 vs 16.5 +/- 3.1 kJ) and a significant improvement in work and power output in sprints 3, 4, and 5. Despite no significant difference in posttest muscle pH between conditions, the NaHCO3 trial resulted in significantly greater posttest muscle [La]. As NaHCO3 ingestion does not increase resting muscle pH or beta(in vitro), it is likely that the improved performance is a result of the greater extracellular buffer concentration increasing H efflux from the muscles into the blood. The significant increase in posttest muscle [La] in NaHCO3 suggests that an increased anaerobic energy contribution is one mechanism by which NaHCO3 ingestion improved RSA.

Bryan Saunders,  Craig Sale,  Roger Harris … (2014)
To determine whether gastrointestinal (GI) distress affects the ergogenicity of sodium bicarbonate and whether the degree of alkalemia or other metabolic responses is different between individuals who improve exercise capacity and those who do not.