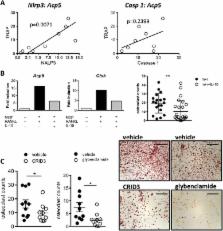 Activation of the inflammasome has been implicated in the pathology of various autoinflammatory and autoimmune diseases. While the NLRP3 inflammasome has been linked to arthritis progression, little is known about its synovial regulation or contribution to joint histopathology. Regulators of inflammation activation, such as interleukin (IL)-10, may have the potential to limit the inflammasome-driven arthritic disease course and associated structural damage. Hence, we used IL-10-deficient (IL-10KO) mice to assess NLRP3 inflammasome-driven arthritic pathology.

Antigen-induced arthritis (AIA) was established in IL-10KO mice and wild-type controls. Using histological and radiographic approaches together with quantitative real-time PCR of synovial mRNA studies, we explored the regulation of inflammasome components. These were combined with selective blocking agents and ex vivo investigative studies in osteoclast differentiation assays.

These data provide a link between IL-10, synovial regulation of the NLRP3 inflammasome and the degree of bone erosions observed in inflammatory arthritis.

Signaling by myeloid C-type lectin receptors in immunity and homeostasis.

Caetano Reis e Sousa,  David Sancho (2012)
Myeloid cells are key drivers of physiological responses to pathogen invasion or tissue damage. Members of the C-type lectin receptor (CLR) family stand out among the specialized receptors utilized by myeloid cells to orchestrate these responses. CLR ligands include carbohydrate, protein, and lipid components of both pathogens and self, which variably trigger endocytic, phagocytic, proinflammatory, or anti-inflammatory reactions. These varied outcomes rely on a versatile system for CLR signaling that includes tyrosine-based motifs that recruit kinases, phosphatases, or endocytic adaptors as well as nontyrosine-based signals that modulate the activation of other pathways or couple to the uptake machinery. Here, we review the signaling properties of myeloid CLRs and how they impact the role of myeloid cells in innate and adaptive immunity.

Intraarticular injection of anakinra in osteoarthritis of the knee: a multicenter, randomized, double-blind, placebo-controlled study.

Kristi Silver,  Francis X Burch,  X Chevalier … (2009)
To evaluate the clinical response, safety, and tolerability of a single intraarticular injection of anakinra in patients with symptomatic osteoarthritis (OA) of the knee. Patients with OA of the knee were enrolled in a multicenter, double-blind, placebo-controlled study and randomized 2:1:2 to receive a single intraarticular injection of placebo, anakinra 50 mg, or anakinra 150 mg in their symptomatic knee. Patients were evaluated for 12 weeks postinjection. The primary end point was the change in the Western Ontario and McMaster Universities Osteoarthritis Index (WOMAC) score from baseline to week 4. Safety assessments included the evaluation of adverse events (AEs), laboratory tests, and vital signs. Pharmacokinetic parameters were assessed in a subset of patients. Of 170 patients who enrolled, 160 (94%) completed the study. The mean improvements from baseline to week 4 in the WOMAC score were not statistically different between the placebo group and the patients who received 50 mg of anakinra (P = 0.67) or 150 mg of anakinra (P = 0.77). Anakinra was well tolerated. No withdrawals due to AEs or serious AEs, and no serious infections or deaths were reported. No clinically significant trends were noted in laboratory values or vital signs. Pharmacokinetic parameters demonstrated that the mean terminal half-life of anakinra in serum after intraarticular injection was approximately 4 hours. Anakinra was well tolerated as a single 50-mg or 150-mg intraarticular injection in patients with OA of the knee. However, anakinra was not associated with improvements in OA symptoms compared with placebo.