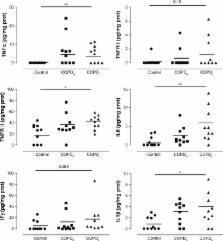 Skeletal muscle wasting is an independent predictor of health-related quality of life and survival in patients with COPD, but the complexity of molecular mechanisms associated with this process has not been fully elucidated. We aimed to determine whether an impaired ability to repair DNA damage contributes to muscle wasting and the accelerated aging phenotype in patients with COPD.

The levels of phosphorylated H2AX (γH2AX), a molecule that promotes DNA repair, were assessed in vastus lateralis biopsies from 10 COPD patients with low fat-free mass index (FFMI; COPD L), 10 with preserved FFMI and 10 age- and gender-matched healthy controls. A panel of selected markers for cellular aging processes (CDKN2A/p16 ink4a, SIRT1, SIRT6, and telomere length) were also assessed. Markers of oxidative stress and cell damage and a panel of pro-inflammatory and anti-inflammatory cytokines were evaluated. Markers of muscle regeneration and apoptosis were also measured.

We observed a decrease in γH2AX expression in COPD L, which occurred in association with a tendency to increase in CDKN2A/p16 ink4a, and a significant decrease in SIRT1 and SIRT6 protein levels. Cellular damage and muscle inflammatory markers were also increased in COPD L.

These data are in keeping with an accelerated aging phenotype as a result of impaired DNA repair and dysregulation of cellular homeostasis in the muscle of COPD L. These data indicate cellular degeneration via stress-induced premature senescence and associated inflammatory responses abetted by the senescence-associated secretory phenotype and reflect an increased expression of markers of oxidative stress and inflammation.

Xiao-Rong Jia,  Rui Wang,  Yin Zheng … (2008)
In lower eukaryotes, Sir2 serves as a histone deacetylase and is implicated in chromatin silencing, longevity, and genome stability. Here we mutated the Sirt1 gene, a homolog of yeast Sir2, in mice to study its function. We show that a majority of SIRT1 null embryos die between E9.5 and E14.5, displaying altered histone modification, impaired DNA damage response, and reduced ability to repair DNA damage. We demonstrate that Sirt1(+/-);p53(+/-) mice develop tumors in multiple tissues, whereas activation of SIRT1 by resveratrol treatment reduces tumorigenesis. Finally, we show that many human cancers exhibit reduced levels of SIRT1 compared to normal controls. Thus, SIRT1 may act as a tumor suppressor through its role in DNA damage response and genome integrity.

p38MAPK is a novel DNA damage response-independent regulator of the senescence-associated secretory phenotype.

Adam Freund,  K. Patil,  Judith Campisi (2011)
Cellular senescence suppresses cancer by forcing potentially oncogenic cells into a permanent cell cycle arrest. Senescent cells also secrete growth factors, proteases, and inflammatory cytokines, termed the senescence-associated secretory phenotype (SASP). Much is known about pathways that regulate the senescence growth arrest, but far less is known about pathways that regulate the SASP. We previously showed that DNA damage response (DDR) signalling is essential, but not sufficient, for the SASP, which is restrained by p53. Here, we delineate another crucial SASP regulatory pathway and its relationship to the DDR and p53. We show that diverse senescence-inducing stimuli activate the stress-inducible kinase p38MAPK in normal human fibroblasts. p38MAPK inhibition markedly reduced the secretion of most SASP factors, constitutive p38MAPK activation was sufficient to induce an SASP, and p53 restrained p38MAPK activation. Further, p38MAPK regulated the SASP independently of the canonical DDR. Mechanistically, p38MAPK induced the SASP largely by increasing NF-κB transcriptional activity. These findings assign p38MAPK a novel role in SASP regulation--one that is necessary, sufficient, and independent of previously described pathways.