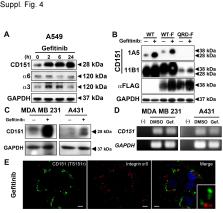 Christopher J. Marshall,  R Marais,  D Schönwasser … (1998)
Phorbol ester treatment of quiescent Swiss 3T3 cells leads to cell proliferation, a response thought to be mediated by protein kinase C (PKC), the major cellular receptor for this class of agents. We demonstrate here that this proliferation is dependent on the activation of the extracellular signal-regulated kinase/mitogen-activated protein kinase (ERK/MAPK) cascade. It is shown that dominant-negative PKC-alpha inhibits stimulation of the ERK/MAPK pathway by phorbol esters in Cos-7 cells, demonstrating a role for PKC in this activation. To assess the potential specificity of PKC isotypes mediating this process, constitutively active mutants of six PKC isotypes (alpha, beta, delta, epsilon, eta, and zeta) were employed. Transient transfection of these PKC mutants into Cos-7 cells showed that members of all three groups of PKC (conventional, novel, and atypical) are able to activate p42 MAPK as well as its immediate upstream activator, the MAPK/ERK kinase MEK-1. At the level of Raf, the kinase that phosphorylates MEK-1, the activation cascade diverges; while conventional and novel PKCs (isotypes alpha and eta) are potent activators of c-Raf1, atypical PKC-zeta cannot increase c-Raf1 activity, stimulating MEK by an independent mechanism. Stimulation of c-Raf1 by PKC-alpha and PKC-eta was abrogated for RafCAAX, which is a membrane-localized, partially active form of c-Raf1. We further established that activation of Raf is independent of phosphorylation at serine residues 259 and 499. In addition to activation, we describe a novel Raf desensitization induced by PKC-alpha, which acts to prevent further Raf stimulation by growth factors. The results thus demonstrate a necessary role for PKC and p42 MAPK activation in 12-O-tetradecanoylphorbol-13-acetate induced mitogenesis and provide evidence for multiple PKC controls acting on this MAPK cascade.

Alpha 3 beta 1 integrin has a crucial role in kidney and lung organogenesis.

Jonathan Jones,  H Rennke,  J. Goldstein … (1996)
A mutation was targeted to the murine alpha3 integrin gene. Homozygous mutant mice survived to birth, but died during the neonatal period. The mutation caused abnormal kidney and lung development. Mutant kidneys displayed decreased branching of the medullary collecting ducts, although the number of nephrons was not altered. Proximal tubules exhibited two distinct subsets of abnormalities, with the epithelial cells either containing excess lysosomes or becoming microcystic. In addition, glomerular development was markedly affected. In mutant kidneys, the extent of branching of glomerular capillary loops was decreased, with capillary lumina being wider than normal. The glomerular basement membrane was disorganized and glomerular podocytes were unable to form mature foot processes. Branching of the bronchi in lungs of mutant mice was also decreased and the large bronchi extended to the periphery. These results indicate a role for integrin receptors in basement membrane organization and branching morphogenesis.

M Hemler,  A Bontrager,  Xiaoming Zhang (2001)
Translocation of conventional protein kinases C (PKCs) to the plasma membrane leads to their specific association with transmembrane-4 superfamily (TM4SF; tetraspanin) proteins (CD9, CD53, CD81, CD82, and CD151), as demonstrated by reciprocal co-immunoprecipitation and covalent cross-linking experiments. Although formation and maintenance of TM4SF-PKC complexes are not dependent on integrins, TM4SF proteins can act as linker molecules, recruiting PKC into proximity with specific integrins. Previous studies showed that the extracellular large loop of TM4SF proteins determines integrin associations. In contrast, specificity for PKC association probably resides within cytoplasmic tails or the first two transmembrane domains of TM4SF proteins, as seen from studies with chimeric CD9 molecules. Consistent with a TM4SF linker function, only those integrins (alpha(3)beta(1), alpha(6)beta(1), and a chimeric "X3TC5" alpha(3) mutant) that associated strongly with tetraspanins were found in association with PKC. We propose that PKC-TM4SF-integrin structures represent a novel type of signaling complex. The simultaneous binding of TM4SF proteins to the extracellular domains of the integrin alpha(3) subunit and to intracellular PKC helps to explain why the integrin alpha3 extracellular domain is needed for both intracellular PKC recruitment and PKC-dependent phosphorylation of the alpha(3) integrin cytoplasmic tail.

OpenAccessThis article is distributed under the terms of the Creative Commons Attribution 4.0 International License ( http://creativecommons.org/licenses/by/4.0/), which permits unrestricted use, distribution, and reproduction in any medium, provided you give appropriate credit to the original author(s) and the source, provide a link to the Creative Commons license, and indicate if changes were made.