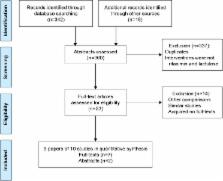 A systematic search was performed in electronic databases and other sources for possible studies focusing on combination therapy of rifaximin and lactulose for HE between January 2000 and February 2018. A meta-analysis was performed by the method recommended by the Cochrane Collaboration, and estimated effect size was presented as risk difference (RD), 95% CI, and the number needed to treat (NNT). Subgroup analysis, sensitivity analysis, and Trial Sequence Analysis were comprehensively performed to indicate the source of heterogeneity and risk of bias.

Combination of rifaximin and lactulose has beneficial effects on HE. Compared with lactulose alone, additional rifaximin increases clinical efficacy and decreases mortality. However, its effects on different types of HE are still uncertain.

Microbiota and the gut-liver axis: bacterial translocation, inflammation and infection in cirrhosis.

Valerio Giannelli,  Vincenza Di Gregorio,  Valerio Iebba … (2014)
Liver disease is associated with qualitative and quantitative changes in the intestinal microbiota. In cirrhotic patients the alteration in gut microbiota is characterized by an overgrowth of potentially pathogenic bacteria (i.e., gram negative species) and a decrease in autochthonous familiae. Here we summarize the available literature on the risk of gut dysbiosis in liver cirrhosis and its clinical consequences. We therefore described the features of the complex interaction between gut microbiota and cirrhotic host, the so called "gut-liver axis", with a particular attention to the acquired risk of bacterial translocation, systemic inflammation and the relationship with systemic infections in the cirrhotic patient. Such knowledge might help to develop novel and innovative strategies for the prevention and therapy of gut dysbiosis and its complication in liver cirrhosis.

A randomized, double-blind, controlled trial comparing rifaximin plus lactulose with lactulose alone in treatment of overt hepatic encephalopathy.

Praveen Sharma,  Siddharth Srivastava,  Rohit Goyal … (2013)
Hepatic encephalopathy (HE) is associated with poor prognosis in cirrhosis. Drugs used in the treatment of HE are primarily directed at the reduction of the blood ammonia levels. Rifaximin and lactulose have shown to be effective in HE. We evaluated the efficacy and safety of rifaximin plus lactulose vs. lactulose alone for treatment of overt HE. In this prospective double-blind randomized controlled trial, 120 patients with overt HE were randomized into two groups: (group A lactulose plus rifaximin 1,200 mg/day; n=63) and group B (lactulose (n=57) plus placebo). The primary end point was complete reversal of HE and the secondary end points were mortality and hospital stay. A total of 120 patients (mean age 39.4±9.6 years; male/female ratio 89:31) were included in the study. 37 (30.8%) patients were in Child-Turcotte-Pugh (CTP) class B and 83 (69.2%) were in CTP class C. Mean CTP score was 9.7±2.8 and the MELD (model for end-stage liver disease) score was 24.6±4.2. At the time of admission, 22 patients (18.3%) had grade 2, 40 (33.3%) had grade 3, and 58 (48.3%) had grade 4 HE. Of the patients, 48 (76%) in group A compared with 29 (50.8%) in group B had complete reversal of HE (P<0.004). There was a significant decrease in mortality after treatment with lactulose plus rifaximin vs. lactulose and placebo (23.8% vs. 49.1%, P<0.05). There were significantly more deaths in group B because of sepsis (group A vs. group B: 7:17, P=0.01), whereas there were no differences because of gastrointestinal bleed (group A vs. group B: 4:4, P=nonsignificant (NS)) and hepatorenal syndrome (group A vs. group B: 4:7, P=NS). Patients in the lactulose plus rifaximin group had shorter hospital stay (5.8±3.4 vs. 8.2±4.6 days, P=0.001). Combination of lactulose plus rifaximin is more effective than lactulose alone in the treatment of overt HE.

Systematic review with meta-analysis: the effects of rifaximin in hepatic encephalopathy.

Lise Gluud,  F Bendtsen,  N Kimer … (2014)
Rifaximin is recommended for prevention of hepatic encephalopathy (HE). The effects of rifaximin on overt and minimal HE are debated. To perform a systematic review and meta-analysis of randomised controlled trials (RCTs) on rifaximin for HE. We performed electronic and manual searches, gathered information from the U.S. Food and Drug Administration Home Page, and obtained unpublished information on trial design and outcome measures from authors and pharmaceutical companies. Meta-analyses were performed and results presented as risk ratios (RR) with 95% confidence intervals (CI) and the number needed to treat. Subgroup, sensitivity, regression and sequential analyses were performed to evaluate the risk of bias and sources of heterogeneity. We included 19 RCTs with 1370 patients. Outcomes were recalculated based on unpublished information of 11 trials. Overall, rifaximin had a beneficial effect on secondary prevention of HE (RR: 1.32; 95% CI 1.06-1.65), but not in a sensitivity analysis on rifaximin after TIPSS (RR: 1.27; 95% CI 1.00-1.53). Rifaximin increased the proportion of patients who recovered from HE (RR: 0.59; 95% CI: 0.46-0.76) and reduced mortality (RR: 0.68, 95% CI 0.48-0.97). The results were robust to adjustments for bias control. No small study effects were identified. The sequential analyses only confirmed the results of the analysis on HE recovery. Rifaximin has a beneficial effect on hepatic encephalopathy and may reduce mortality. The combined evidence suggests that rifaximin may be considered in the evidence-based management of hepatic encephalopathy. © 2014 John Wiley & Sons Ltd.