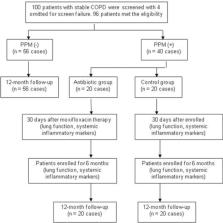 To evaluate patients with stable COPD for the presence of potentially pathogenic microorganisms (PPM), systemic inflammation and the effects of short-term antibiotic therapy in PPM positive patients.

From January 2016 to June 2017, we enrolled 96 stable COPD patients. Bacterial cultures from sputum collections were quantitated, along with markers for systemic inflammation including serum C-reactive protein (CRP), interleukin-8 (IL-8) and plasma fibrinogen (FIB) in all patients. All enrolled patients were followed for 12 months. Forty patients were identified as PPM positive and were randomly divided into an antibiotic group and a control group. The antibiotic group was treated with moxifloxacin orally for 6 days. Lung function and markers for systemic inflammation were repeatedly measured at 30 days and 6 months in PPM positive subjects.

Tom M A Wilkinson,  Jadwiga Wedzicha,  J Hurst … (2008)
Frequent chronic obstructive pulmonary disease (COPD) exacerbations are a major cause of hospital admission and mortality and are associated with increased airway inflammation. Macrolides have airway antiinflammatory actions and may reduce the incidence of COPD exacerbations. To determine whether regular therapy with macrolides reduces exacerbation frequency. We performed a randomized, double-blind, placebo-controlled study of erythromycin administered at 250 mg twice daily to patients with COPD over 12 months, with primary outcome variable being the number of moderate and/or severe exacerbations (treated with systemic steroids, treated with antibiotics, or hospitalized). We randomized 109 outpatients: 69 (63%) males, 52 (48%) current smokers, mean (SD) age 67.2 (8.6) years, FEV1 1.32 (0.53) L, FEV1% predicted 50 (18)%. Thirty-eight (35%) of the patients had three or more exacerbations in the year before recruitment, with no differences between treatment groups. There were a total of 206 moderate to severe exacerbations: 125 occurred in the placebo arm. Ten in the placebo group and nine in the macrolide group withdrew. Generalized linear modeling showed that the rate ratio for exacerbations for the macrolide-treated patients compared with placebo-treated patients was 0.648 (95% confidence interval: 0.489, 0.859; P = 0.003) and that these patients had shorter duration exacerbations compared with placebo. There were no differences between the macrolide and placebo arms in terms of stable FEV1, sputum IL-6, IL-8, myeloperoxidase, bacterial flora, serum C-reactive protein, or serum IL-6 or in changes in these parameters from baseline to first exacerbation over the 1-year study period. Macrolide therapy was associated with a significant reduction in exacerbations compared with placebo and may be useful in decreasing the excessive disease burden in this important patient population. Clinical trial registered with www.clinicaltrials.gov (NCT 00147667).

Joaquim Angrill,  Eduard Monsó,  Nestor Soler … (2005)
The culture of bronchial secretions from the lower airway has been reported to be positive for potentially pathogenic microorganisms (PPMs) in patients with stable chronic obstructive pulmonary disease (COPD), but the determinants and effects of this bacterial load in the airway are not established. To determine the bronchial microbial pattern in COPD and its relationship with exacerbation, we pooled analysis of crude data from studies that used protected specimen brush sampling, with age, sex, smoking, lung function, and microbiologic features of the lower airway as independent variables and exacerbation as the outcome, using logistic regression modeling. Of 337 study participants, 70 were healthy, 181 had stable COPD, and 86 had exacerbated COPD. Differences in the microbial characteristics in the participating laboratories were not statistically significant. A cutoff point of 10(2) colony-forming units (CFU) per milliliter or greater for the identification of abnormal positive culture results for PPMs was defined using the 95th percentile in the pooled analysis of healthy individuals. Bronchial colonization of 10(2) CFU/mL or greater by PPMs was found in 53 patients with stable COPD (29%) and in 46 patients with exacerbated COPD (54%) (P<.001, chi(2) test), with a predominance of Haemophilus influenzae and Pseudomonas aeruginosa. Higher microbial loads were associated with exacerbation and showed a statistically significant dose-response relationship after adjustment for covariates (odds ratio, 3.62; 95% confidence interval, 1.47-8.90), but P aeruginosa persisted as a statistically significant risk factor after adjustment for microbial load (odds ratio, 11.12; 95% confidence interval, 1.17-105.82). One quarter of the patients with COPD are colonized by PPMs during their stable periods. Exacerbation is associated with the overgrowth of PPMs and with the appearance of P aeruginosa in the lower airway, which is associated with exacerbation symptoms independent of load.

Consensus document on the overlap phenotype COPD-asthma in COPD.

Juan Soler-Cataluna,  Borja Cosio,  Jose Luis Izquierdo … (2012)
Although asthma and COPD are different pathologies, many patients share characteristics from both entities. These cases can have different evolutions and responses to treatment. Nevertheless, the evidence available is limited, and it is necessary to evaluate whether they represent a differential phenotype and provide recommendations about diagnosis and treatment, in addition to identifying possible gaps in our understanding of asthma and COPD. A nation-wide consensus of experts in COPD in two stages: 1) during an initial meeting, the topics to be dealt with were established and a first draft of statements was elaborated with a structured "brainstorming" method; 2) consensus was reached with two rounds of e-mails, using a Likert-type scale. Consensus was reached about the existence of a differential clinical phenotype known as"Overlap Phenotype COPD-Asthma", whose diagnosis is made when 2 major criteria and 2 minor criteria are met. The major criteria include very positive bronchodilator test (increase in FEV(1) ≥ 15% and ≥ 400ml), eosinophilia in sputum and personal history of asthma. Minor criteria include high total IgE, personal history of atopy and positive bronchodilator test (increase in FEV(1) ≥ 12% and ≥ 200ml) on two or more occasions. The early use of individually-adjusted inhaled corticosteroids is recommended, and caution must be taken with their abrupt withdrawal. Meanwhile, in severe cases the use of triple therapy should be evaluated. Finally, there is an obvious lack of specific studies about the natural history and the treatment of these patients. It is necessary to expand our knowledge about this phenotype in order to establish adequate guidelines and recommendations for its diagnosis and treatment. Copyright © 2011 SEPAR. Published by Elsevier Espana. All rights reserved.