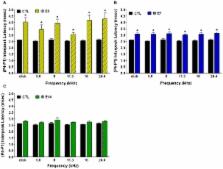 It is well acknowledged from observations in humans that iron deficiency during pregnancy can be associated with a number of developmental problems in the newborn and developing child. Due to the obvious limitations of human studies, the stage during gestation at which maternal iron deficiency causes an apparent impairment in the offspring remains elusive. In order to begin to understand the time window(s) during pregnancy that is/are especially susceptible to suboptimal iron levels, which may result in negative effects on the development of the fetus, we developed a rat model in which we were able to manipulate and monitor the dietary iron intake during specific stages of pregnancy and analyzed the developing fetuses. We established four different dietary-feeding protocols that were designed to render the fetuses iron deficient at different gestational stages. Based on a functional analysis that employed Auditory Brainstem Response measurements, we found that maternal iron restriction initiated prior to conception and during the first trimester were associated with profound changes in the developing fetus compared to iron restriction initiated later in pregnancy. We also showed that the presence of iron deficiency anemia, low body weight, and changes in core body temperature were not defining factors in the establishment of neural impairment in the rodent offspring.

Our data may have significant relevance for understanding the impact of suboptimal iron levels during pregnancy not only on the mother but also on the developing fetus and hence might lead to a more informed timing of iron supplementation during pregnancy.

A review of studies on the effect of iron deficiency on cognitive development in children.

Neal Grantham,  Samuel Ani (2001)
Studies on the effect of iron deficiency on children's cognition and behavior are selectively reviewed, looking for evidence of a causal relationship. Most correlational studies have found associations between iron-deficiency anemia and poor cognitive and motor development and behavioral problems. Longitudinal studies consistently indicate that children anemic in infancy continue to have poorer cognition, school achievement, and more behavior problems into middle childhood. However, the possible confounding effects of poor socioeconomic backgrounds prevent causal inferences from being made. In anemic children 2 y old, the evidence from RCT is reasonably convincing but not conclusive. RCT of iron treatment are warranted especially in younger children.

Iron status during pregnancy: setting the stage for mother and infant.

Theresa O. Scholl (2005)
Supplementation with iron is generally recommended during pregnancy to meet the iron needs of both mother and fetus. When detected early in pregnancy, iron deficiency anemia (IDA) is associated with a > 2-fold increase in the risk of preterm delivery. Maternal anemia when diagnosed before midpregnancy is also associated with an increased risk of preterm birth. Results of recent randomized clinical trials in the United States and in Nepal that involved early supplementation with iron showed some reduction in risk of low birth weight or preterm low birth weight, but not preterm delivery. During the 3rd trimester, maternal anemia usually is not associated with increased risk of adverse pregnancy outcomes and may be an indicator of an expanded maternal plasma volume. High levels of hemoglobin, hematocrit, and ferritin are associated with an increased risk of fetal growth restriction, preterm delivery, and preeclampsia. While iron supplementation increases maternal iron status and stores, factors that underlie adverse pregnancy outcome are considered to result in this association, not iron supplements. On the other hand, iron supplements and increased iron stores have recently been linked to maternal complications (eg, gestational diabetes) and increased oxidative stress during pregnancy. Consequently, while iron supplementation may improve pregnancy outcome when the mother is iron deficient it is also possible that prophylactic supplementation may increase risk when the mother does not have iron deficiency or IDA. Anemia and IDA are not synonymous, even among low-income minority women in their reproductive years.

Prevalence of iron deficiency in the United States.

Publisher ID: PONE-D-10-00086
DOI: 10.1371/journal.pone.0017483
PMC ID: 3057971
PubMed ID: 21423661
Copyright statement: Mihaila et al. This is an open-access article distributed under the terms of the Creative Commons Attribution License, which permits unrestricted use, distribution, and reproduction in any medium, provided the original author and source are credited.