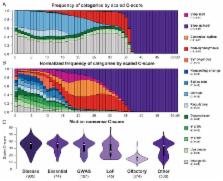 A method and server for predicting damaging missense mutations

Ivan Adzhubei,  Steffen Schmidt,  Leonid Peshkin … (2010)
To the Editor: Applications of rapidly advancing sequencing technologies exacerbate the need to interpret individual sequence variants. Sequencing of phenotyped clinical subjects will soon become a method of choice in studies of the genetic causes of Mendelian and complex diseases. New exon capture techniques will direct sequencing efforts towards the most informative and easily interpretable protein-coding fraction of the genome. Thus, the demand for computational predictions of the impact of protein sequence variants will continue to grow. Here we present a new method and the corresponding software tool, PolyPhen-2 (http://genetics.bwh.harvard.edu/pph2/), which is different from the early tool PolyPhen1 in the set of predictive features, alignment pipeline, and the method of classification (Fig. 1a). PolyPhen-2 uses eight sequence-based and three structure-based predictive features (Supplementary Table 1) which were selected automatically by an iterative greedy algorithm (Supplementary Methods). Majority of these features involve comparison of a property of the wild-type (ancestral, normal) allele and the corresponding property of the mutant (derived, disease-causing) allele, which together define an amino acid replacement. Most informative features characterize how well the two human alleles fit into the pattern of amino acid replacements within the multiple sequence alignment of homologous proteins, how distant the protein harboring the first deviation from the human wild-type allele is from the human protein, and whether the mutant allele originated at a hypermutable site2. The alignment pipeline selects the set of homologous sequences for the analysis using a clustering algorithm and then constructs and refines their multiple alignment (Supplementary Fig. 1). The functional significance of an allele replacement is predicted from its individual features (Supplementary Figs. 2–4) by Naïve Bayes classifier (Supplementary Methods). We used two pairs of datasets to train and test PolyPhen-2. We compiled the first pair, HumDiv, from all 3,155 damaging alleles with known effects on the molecular function causing human Mendelian diseases, present in the UniProt database, together with 6,321 differences between human proteins and their closely related mammalian homologs, assumed to be non-damaging (Supplementary Methods). The second pair, HumVar3, consists of all the 13,032 human disease-causing mutations from UniProt, together with 8,946 human nsSNPs without annotated involvement in disease, which were treated as non-damaging. We found that PolyPhen-2 performance, as presented by its receiver operating characteristic curves, was consistently superior compared to PolyPhen (Fig. 1b) and it also compared favorably with the three other popular prediction tools4–6 (Fig. 1c). For a false positive rate of 20%, PolyPhen-2 achieves the rate of true positive predictions of 92% and 73% on HumDiv and HumVar, respectively (Supplementary Table 2). One reason for a lower accuracy of predictions on HumVar is that nsSNPs assumed to be non-damaging in HumVar contain a sizable fraction of mildly deleterious alleles. In contrast, most of amino acid replacements assumed non-damaging in HumDiv must be close to selective neutrality. Because alleles that are even mildly but unconditionally deleterious cannot be fixed in the evolving lineage, no method based on comparative sequence analysis is ideal for discriminating between drastically and mildly deleterious mutations, which are assigned to the opposite categories in HumVar. Another reason is that HumDiv uses an extra criterion to avoid possible erroneous annotations of damaging mutations. For a mutation, PolyPhen-2 calculates Naïve Bayes posterior probability that this mutation is damaging and reports estimates of false positive (the chance that the mutation is classified as damaging when it is in fact non-damaging) and true positive (the chance that the mutation is classified as damaging when it is indeed damaging) rates. A mutation is also appraised qualitatively, as benign, possibly damaging, or probably damaging (Supplementary Methods). The user can choose between HumDiv- and HumVar-trained PolyPhen-2. Diagnostics of Mendelian diseases requires distinguishing mutations with drastic effects from all the remaining human variation, including abundant mildly deleterious alleles. Thus, HumVar-trained PolyPhen-2 should be used for this task. In contrast, HumDiv-trained PolyPhen-2 should be used for evaluating rare alleles at loci potentially involved in complex phenotypes, dense mapping of regions identified by genome-wide association studies, and analysis of natural selection from sequence data, where even mildly deleterious alleles must be treated as damaging. Supplementary Material 1

Carlo Sidore,  Yu Wang,  Lachlan Coin (2013)
Summary Through characterising the geographic and functional spectrum of human genetic variation, the 1000 Genomes Project aims to build a resource to help understand the genetic contribution to disease. We describe the genomes of 1,092 individuals from 14 populations, constructed using a combination of low-coverage whole-genome and exome sequencing. By developing methodologies to integrate information across multiple algorithms and diverse data sources we provide a validated haplotype map of 38 million SNPs, 1.4 million indels and over 14 thousand larger deletions. We show that individuals from different populations carry different profiles of rare and common variants and that low-frequency variants show substantial geographic differentiation, which is further increased by the action of purifying selection. We show that evolutionary conservation and coding consequence are key determinants of the strength of purifying selection, that rare-variant load varies substantially across biological pathways and that each individual harbours hundreds of rare non-coding variants at conserved sites, such as transcription-factor-motif disrupting changes. This resource, which captures up to 98% of accessible SNPs at a frequency of 1% in populations of medical genetics focus, enables analysis of common and low-frequency variants in individuals from diverse, including admixed, populations.