The impact of intravenous dexamethasone on the efficacy and duration of analgesia of paravertebral block in breast cancer surgery: a randomized controlled trial 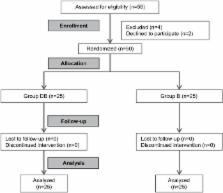 The study aimed at the evaluation of the impact of intravenous (IV) dexamethasone on efficacy and duration of analgesia of paravertebral block (PVB) in patients undergoing modified radical mastectomy (MRM).

This randomized, double-blind controlled trial included 50 patients with breast cancer scheduled for unilateral MRM. Ultrasound-guided PVB was performed in out-of-plane technique. The technique was repeated at each segment from C7 to T6. The participants were randomly allocated to one of two groups. Group BD (n=25) received IV 8 mg dexamethasone diluted with 8 mL of normal saline to reach 10 mL solution, while Group B received IV 10 mL normal saline. Top-up local infiltration analgesia into the surgical field was performed by the surgeon if needed using lidocaine 1% intraoperatively. Propofol infusion of 50–100 µg/kg/min was maintained throughout the surgery. The time to administration of the first postoperative analgesic dose, pain intensity as visual analog scale (VAS) score, number of patients who required rescue morphine analgesia, total morphine consumption, postoperative nausea and vomiting (PONV) impact scale, and the overall satisfaction of patients with pain management were measured.

Systemic dexamethasone increased the efficacy and duration of the single-shot multilevel PVB in breast cancer surgery.

Mehran Razazian,  Ali Movafegh,  Alipasha Meysamie … (2005)
Different additives have been used to prolong regional blockade. We designed a prospective, randomized, double-blind study to evaluate the effect of dexamethasone added to lidocaine on the onset and duration of axillary brachial plexus block. Sixty patients scheduled for elective hand and forearm surgery under axillary brachial plexus block were randomly allocated to receive either 34 mL lidocaine 1.5% with 2 mL of isotonic saline chloride (control group, n = 30) or 34 mL lidocaine 1.5% with 2 mL of dexamethasone (8 mg) (dexamethasone group, n = 30). Neither epinephrine nor bicarbonate was added to the treatment mixture. We used a nerve stimulator and multiple stimulations technique in all of the patients. After performance of the block, sensory and motor blockade of radial, median, musculocutaneous, and ulnar nerves were recorded at 5, 15, and 30 min. The onset time of the sensory and motor blockade was defined as the time between last injection and the total abolition of the pinprick response and complete paralysis. The duration of sensory and motor blocks were considered as the time interval between the administration of the local anesthetic and the first postoperative pain and complete recovery of motor functions. Sixteen patients were excluded because of unsuccessful blockade. The duration of surgery and the onset times of sensory and motor block were similar in the two groups. The duration of sensory (242 +/- 76 versus 98 +/- 33 min) and motor (310 +/- 81 versus 130 +/- 31 min) blockade were significantly longer in the dexamethasone than in the control group (P < 0.01). We conclude that the addition of dexamethasone to lidocaine 1.5% solution in axillary brachial plexus block prolongs the duration of sensory and motor blockade.