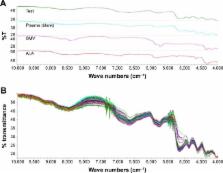 Time and cost saving is an essential requirement in pharmacokinetics and bioequivalence studies. The aim of this study is to use a simple, fast, and nondestructive near-infrared transmission spectroscopic method to quantify simvastatin (SMV) concentrations in mice plasma and also to improve SMV bioavailability by using alpha-lipoic acid as a carrier. Calibration curve was built at a concentration range of 10–250 ng/mL, and HPLC method was considered as a reference method. A partial least squares regression analysis model was used for method development, which gave less root mean square error cross-validation. Comparison of SMV concentrations obtained from both instruments showed no statistically significant differences between all the data. Near-infrared spectroscopy was utilized as a rapid, simple accurate method to quantify drug–plasma concentrations without need for any extraction protocols, and the significant effect of alpha-lipoic acid as a novel carrier to enhance SMV bioavailability is also addressed.

Development of a nanoprecipitation method intended for the entrapment of hydrophilic drugs into nanoparticles.

Ugo Bilati,  Eric Allémann,  Eric Doelker (2004)
This study investigates formulation and process modifications to improve the versatility of the nanoprecipitation technique, particularly with respect to the encapsulation of hydrophilic drugs (e.g. proteins). More specifically, the principal objective was to explore the influence of such modifications on nanoparticle size. Selected parameters of the nanoprecipitation method, such as the solvent and the non-solvent nature, the solvent/non-solvent volume ratio and the polymer concentration, were varied so as to obtain polymeric nano-carriers. The feasibility of such a modified method was assessed and resulting unloaded nanoparticles were characterized with respect to their size and shape. It was shown that the mean particle size was closely dependent on the type of non-solvent selected. When alcohols were used, the final mean size increased in the sequence: methanol

Khaled M Hosny,  Bader Aljaeid (2014)
The aim of this study was to prepare sildenafil citrate as solid lipid nanoparticles (SLNs), in order to find an innovative way for alleviating the disadvantages associated with commercially available sildenafil citrate tablets. These limitations include poor solubility and extensive first-pass metabolism, resulting in low (40%) bioavailability and short elimination half-life (4 h).