Global, regional, and national under-5 mortality, adult mortality, age-specific mortality, and life expectancy, 1970–2016: a systematic analysis for the Global Burden of Disease Study 2016 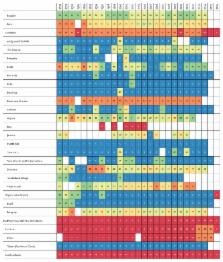 Detailed assessments of mortality patterns, particularly age-specific mortality, represent a crucial input that enables health systems to target interventions to specific populations. Understanding how all-cause mortality has changed with respect to development status can identify exemplars for best practice. To accomplish this, the Global Burden of Diseases, Injuries, and Risk Factors Study 2016 (GBD 2016) estimated age-specific and sex-specific all-cause mortality between 1970 and 2016 for 195 countries and territories and at the subnational level for the five countries with a population greater than 200 million in 2016.

We have evaluated how well civil registration systems captured deaths using a set of demographic methods called death distribution methods for adults and from consideration of survey and census data for children younger than 5 years. We generated an overall assessment of completeness of registration of deaths by dividing registered deaths in each location-year by our estimate of all-age deaths generated from our overall estimation process. For 163 locations, including subnational units in countries with a population greater than 200 million with complete vital registration (VR) systems, our estimates were largely driven by the observed data, with corrections for small fluctuations in numbers and estimation for recent years where there were lags in data reporting (lags were variable by location, generally between 1 year and 6 years). For other locations, we took advantage of different data sources available to measure under-5 mortality rates (U5MR) using complete birth histories, summary birth histories, and incomplete VR with adjustments; we measured adult mortality rate (the probability of death in individuals aged 15–60 years) using adjusted incomplete VR, sibling histories, and household death recall. We used the U5MR and adult mortality rate, together with crude death rate due to HIV in the GBD model life table system, to estimate age-specific and sex-specific death rates for each location-year. Using various international databases, we identified fatal discontinuities, which we defined as increases in the death rate of more than one death per million, resulting from conflict and terrorism, natural disasters, major transport or technological accidents, and a subset of epidemic infectious diseases; these were added to estimates in the relevant years. In 47 countries with an identified peak adult prevalence for HIV/AIDS of more than 0·5% and where VR systems were less than 65% complete, we informed our estimates of age-sex-specific mortality using the Estimation and Projection Package (EPP)-Spectrum model fitted to national HIV/AIDS prevalence surveys and antenatal clinic serosurveillance systems. We estimated stillbirths, early neonatal, late neonatal, and childhood mortality using both survey and VR data in spatiotemporal Gaussian process regression models. We estimated abridged life tables for all location-years using age-specific death rates. We grouped locations into development quintiles based on the Socio-demographic Index (SDI) and analysed mortality trends by quintile. Using spline regression, we estimated the expected mortality rate for each age-sex group as a function of SDI. We identified countries with higher life expectancy than expected by comparing observed life expectancy to anticipated life expectancy on the basis of development status alone.

Completeness in the registration of deaths increased from 28% in 1970 to a peak of 45% in 2013; completeness was lower after 2013 because of lags in reporting. Total deaths in children younger than 5 years decreased from 1970 to 2016, and slower decreases occurred at ages 5–24 years. By contrast, numbers of adult deaths increased in each 5-year age bracket above the age of 25 years. The distribution of annualised rates of change in age-specific mortality rate differed over the period 2000 to 2016 compared with earlier decades: increasing annualised rates of change were less frequent, although rising annualised rates of change still occurred in some locations, particularly for adolescent and younger adult age groups. Rates of stillbirths and under-5 mortality both decreased globally from 1970. Evidence for global convergence of death rates was mixed; although the absolute difference between age-standardised death rates narrowed between countries at the lowest and highest levels of SDI, the ratio of these death rates—a measure of relative inequality—increased slightly. There was a strong shift between 1970 and 2016 toward higher life expectancy, most noticeably at higher levels of SDI. Among countries with populations greater than 1 million in 2016, life expectancy at birth was highest for women in Japan, at 86·9 years (95% UI 86·7–87·2), and for men in Singapore, at 81·3 years (78·8–83·7) in 2016. Male life expectancy was generally lower than female life expectancy between 1970 and 2016, and the gap between male and female life expectancy increased with progression to higher levels of SDI. Some countries with exceptional health performance in 1990 in terms of the difference in observed to expected life expectancy at birth had slower progress on the same measure in 2016.

Globally, mortality rates have decreased across all age groups over the past five decades, with the largest improvements occurring among children younger than 5 years. However, at the national level, considerable heterogeneity remains in terms of both level and rate of changes in age-specific mortality; increases in mortality for certain age groups occurred in some locations. We found evidence that the absolute gap between countries in age-specific death rates has declined, although the relative gap for some age-sex groups increased. Countries that now lead in terms of having higher observed life expectancy than that expected on the basis of development alone, or locations that have either increased this advantage or rapidly decreased the deficit from expected levels, could provide insight into the means to accelerate progress in nations where progress has stalled.

Marcello Tonelli, Natasha Wiebe, Bruce Culleton … (2006)
Current guidelines identify people with chronic kidney disease (CKD) as being at high risk for cardiovascular and all-cause mortality. Because as many as 19 million Americans may have CKD, a comprehensive summary of this risk would be potentially useful for planning public health policy. A systematic review of the association between non-dialysis-dependent CKD and the risk for all-cause and cardiovascular mortality was conducted. Patient- and study-related characteristics that influenced the magnitude of these associations also were investigated. MEDLINE and EMBASE databases were searched, and reference lists through December 2004 were consulted. Authors of 10 primary studies provided additional data. Cohort studies or cohort analyses of randomized, controlled trials that compared mortality between those with and without chronically reduced kidney function were included. Studies were excluded from review when participants were followed for < 1 yr or had ESRD. Two reviewers independently extracted data on study setting, quality, participant and renal function characteristics, and outcomes. Thirty-nine studies that followed a total of 1,371,990 participants were reviewed. The unadjusted relative risk for mortality in participants with reduced kidney function compared with those without ranged from 0.94 to 5.0 and was significantly more than 1.0 in 93% of cohorts. Among the 16 studies that provided suitable data, the absolute risk for death increased exponentially with decreasing renal function. Fourteen cohorts described the risk for mortality from reduced kidney function, after adjustment for other established risk factors. Although adjusted relative hazards were consistently lower than unadjusted relative risks (median reduction 17%), they remained significantly more than 1.0 in 71% of cohorts. This review supports current guidelines that identify individuals with CKD as being at high risk for cardiovascular mortality. Determining which interventions best offset this risk remains a health priority.

Global, regional, and national levels and trends in under-5 mortality between 1990 and 2015, with scenario-based projections to 2030: a systematic analysis by the UN Inter-agency Group for Child Mortality Estimation.

Danzhen You, Lucia Hug, Simon Ejdemyr … (2015)
In 2000, world leaders agreed on the Millennium Development Goals (MDGs). MDG 4 called for a two-thirds reduction in the under-5 mortality rate between 1990 and 2015. We aimed to estimate levels and trends in under-5 mortality for 195 countries from 1990 to 2015 to assess MDG 4 achievement and then intended to project how various post-2015 targets and observed rates of change will affect the burden of under-5 deaths from 2016 to 2030.

Huge variation in Russian mortality rates 1984-94: artefact, alcohol, or what?

D. A Leon, L Chenet, V Shkolnikov … (1997)
According to published data, between 1984 and 1994 mortality rates in Russia initially underwent a rapid decline followed by an even steeper increase. In 1994, male life expectancy at birth was 57.6 years, having fallen by 6.2 years since 1990. There has been concern that such striking fluctuations in mortality are an artefact, although, among other factors, alcohol consumption has been implicated. We analysed the age-specific and cause-specific patterns of mortality decrease and increase by use of data from a newly reconstructed mortality series for Russia so that we could examine the plausibility of various explanations for the mortality trends. All major causes of death, with the exception of neoplasms, showed declines in mortality between 1984 and 1987 and increases between 1987 and 1994. In relative terms, these tended to be largest for the age-group 40-50 years; surprisingly, they were of the same magnitude among women and men. The largest declines and subsequent increases in proportional terms were observed for alcohol-related deaths and accidents and violence. However, pronounced effects were also seen for deaths from infections, circulatory disease, and respiratory disease. No substantial variations were seen for neoplasms. The stability of mortality from neoplasms in contrast to other causes over the period 1984-94 largely precludes the possibility that the changes in life expectancy are mainly an artefact, particularly one due to underestimation of the population. Although factors such as nutrition and health services may be involved, the evidence is that substantial changes in alcohol consumption over the period could plausibly explain the main features of the mortality fluctuations observed. These results provide a major challenge to public health in Russia and to our understanding of the determinants of alcohol consumption and its role in explaining mortality patterns within and between many other countries.

This is an Open Access article under the CC BY 4.0 license. ( https://creativecommons.org/licenses/by/4.0/)