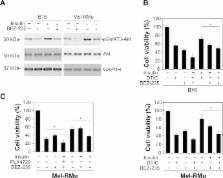 There is currently no curative treatment for melanoma once the disease spreads beyond the original site. Although activation of the PI3K/Akt pathway resulting from genetic mutations and epigenetic deregulation of its major regulators is known to cause resistance of melanoma to therapeutic agents, including the conventional chemotherapeutic drug dacarbazine and the Food and Drug Administration-approved mutant BRAF inhibitors vemurafenib and dabrafenib, the role of extracellular stimuli of the pathway, such as insulin, in drug resistance of melanoma remains less understood.

The effect of insulin on cytotoxicity induced by dacarbazine or the mutant BRAF inhibitor PLX4720 was tested by pre-incubation of melanoma cells with insulin. Cytotoxicity was determined by the MTS assay. The role of the PI3K/Akt pathway in the insulin-triggered drug resistance was examined using the PI3K inhibitor LY294002 and the PI3K and mammalian target of rapamycin dual inhibitor BEZ-235. Activation of the PI3K/Akt pathway was monitored by Western blot analysis of phosphorylated levels of Akt.

Insulin attenuates the therapeutic efficacy of dacarbazine and PLX4720 in melanoma cells, which is mediated by activation of the PI3K/Akt pathway and can be overcome by PI3K inhibitors.

Cory M Johannessen,  Jesse Boehm,  So Young Kim … (2010)
Oncogenic mutations in the serine/threonine kinase B-RAF are found in 50–70% of malignant melanomas1. Pre-clinical studies have demonstrated that the B-RAFV600E mutation predicts a dependency on the mitogen activated protein kinase (MAPK) signaling cascade in melanoma1–5—an observation that has been validated by the success of RAF and MEK inhibitors in clinical trials6–8. However, clinical responses to targeted anticancer therapeutics are frequently confounded by de novo or acquired resistance9–11. Identification of resistance mechanisms in a manner that elucidates alternative ‘druggable’ targets may inform effective long-term treatment strategies12. Here, we expressed ~600 kinase and kinase-related open reading frames (ORFs) in parallel to functionally interrogate resistance to a selective RAF kinase inhibitor. We identified MAP3K8 (COT/TPL2) as a MAPK pathway agonist that drives resistance to RAF inhibition in B-RAFV600E cell lines. COT activates ERK primarily through MEK-dependent mechanisms that do not require RAF signaling. Moreover, COT expression is associated with de novo resistance in B-RAFV600E cultured cell lines and acquired resistance in melanoma cells and tissue obtained from relapsing patients following treatment with MEK or RAF inhibition. We further identify combinatorial MAPK pathway inhibition or targeting of COT kinase activity as possible therapeutic strategies for reducing MAPK pathway activation in this setting. Together, these results provide new insights into resistance mechanisms involving the MAPK pathway and articulate an integrative approach through which high-throughput functional screens may inform the development of novel therapeutic strategies.

Acquired resistance to BRAF inhibitors mediated by a RAF kinase switch in melanoma can be overcome by cotargeting MEK and IGF-1R/PI3K.