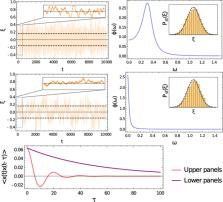 Understanding the relationship between complexity and stability in large dynamical systems—such as ecosystems—remains a key open question in complexity theory which has inspired a rich body of work developed over more than fifty years. The vast majority of this theory addresses asymptotic linear stability around equilibrium points, but the idea of ‘stability’ in fact has other uses in the empirical ecological literature. The important notion of ‘temporal stability’ describes the character of fluctuations in population dynamics, driven by intrinsic or extrinsic noise. Here we apply tools from random matrix theory to the problem of temporal stability, deriving analytical predictions for the fluctuation spectra of complex ecological networks. We show that different network structures leave distinct signatures in the spectrum of fluctuations, and demonstrate the application of our theory to the analysis of ecological time-series data of plankton abundances.

Fluctuations in ecosystems and other large dynamical systems are driven by intrinsic and extrinsic noise and contain hidden information which is difficult to extract. Here, the authors derive analytical characterizations of fluctuations in random interacting systems, allowing inference of network properties from time series data.

Species synchrony and its drivers: neutral and nonneutral community dynamics in fluctuating environments.

Michel Loreau,  Claire de Labrusse (2008)
Independent species fluctuations are commonly used as a null hypothesis to test the role of competition and niche differences between species in community stability. This hypothesis, however, is unrealistic because it ignores the forces that contribute to synchronization of population dynamics. Here we present a mechanistic neutral model that describes the dynamics of a community of equivalent species under the joint influence of density dependence, environmental forcing, and demographic stochasticity. We also introduce a new standardized measure of species synchrony in multispecies communities. We show that the per capita population growth rates of equivalent species are strongly synchronized, especially when endogenous population dynamics are cyclic or chaotic, while their long-term fluctuations in population sizes are desynchronized by ecological drift. We then generalize our model to nonneutral dynamics by incorporating temporal and nontemporal forms of niche differentiation. Niche differentiation consistently decreases the synchrony of species per capita population growth rates, while its effects on the synchrony of population sizes are more complex. Comparing the observed synchrony of species per capita population growth rates with that predicted by the neutral model potentially provides a simple test of deterministic asynchrony in a community.