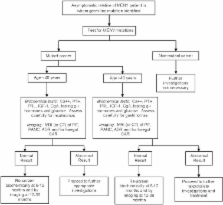 Multiple endocrine neoplasia (MEN) is characterized by the occurrence of tumors involving two or more endocrine glands within a single patient. Four major forms of MEN, which are autosomal dominant disorders, are recognized and referred to as: MEN type 1 (MEN1), due to menin mutations; MEN2 (previously MEN2A) due to mutations of a tyrosine kinase receptor encoded by the rearranged during transfection (RET) protoncogene; MEN3 (previously MEN2B) due to RET mutations; and MEN4 due to cyclin-dependent kinase inhibitor (CDNK1B) mutations. Each MEN type is associated with the occurrence of specific tumors. Thus, MEN1 is characterized by the occurrence of parathyroid, pancreatic islet and anterior pituitary tumors; MEN2 is characterized by the occurrence of medullary thyroid carcinoma (MTC) in association with phaeochromocytoma and parathyroid tumors; MEN3 is characterized by the occurrence of MTC and phaeochromocytoma in association with a marfanoid habitus, mucosal neuromas, medullated corneal fibers and intestinal autonomic ganglion dysfunction, leading to megacolon; and MEN4, which is also referred to as MENX, is characterized by the occurrence of parathyroid and anterior pituitary tumors in possible association with tumors of the adrenals, kidneys, and reproductive organs. This review will focus on the clinical and molecular details of the MEN1 and MEN4 syndromes. The gene causing MEN1 is located on chromosome 11q13, and encodes a 610 amino-acid protein, menin, which has functions in cell division, genome stability, and transcription regulation. Menin, which acts as scaffold protein, may increase or decrease gene expression by epigenetic regulation of gene expression via histone methylation. Thus, menin by forming a subunit of the mixed lineage leukemia (MLL) complexes that trimethylate histone H3 at lysine 4 (H3K4), facilitates activation of transcriptional activity in target genes such as cyclin-dependent kinase (CDK) inhibitors; and by interacting with the suppressor of variegation 3–9 homolog family protein (SUV39H1) to mediate H3K methylation, thereby silencing transcriptional activity of target genes. MEN1-associated tumors harbor germline and somatic mutations, consistent with Knudson’s two-hit hypothesis. Genetic diagnosis to identify individuals with germline MEN1 mutations has facilitated appropriate targeting of clinical, biochemical and radiological screening for this high risk group of patients for whom earlier implementation of treatments can then be considered. MEN4 is caused by heterozygous mutations of CDNK1B which encodes the 196 amino-acid CDK1 p27Kip1, which is activated by H3K4 methylation.

Alberto Fernández-Teruel,  John Wass,  Niki Karavitaki (2010)
Pituitary adenomas (PAs) are associated with increased morbidity and mortality. The optimal delivery of services and the provision of care for patients with PAs require distribution of the resources proportionate to the impact of these conditions on the community. Currently, the resource allocation for PAs in the health care system is lacking a reliable and an up-to-date epidemiological background that would reflect the recent advances in the diagnostic technologies, leading to the earlier recognition of these tumours. To determine the prevalence, the diagnostic delay and the characteristics of patients with PA in a well-defined geographical area of the UK (Banbury, Oxfordshire). Sixteen general practitioner (GP) surgeries covering the area of Banbury and a total population of 89 334 inhabitants were asked to participate in the study (data confirmed on 31 July 2006). Fourteen surgeries with a total of 81,449 inhabitants (91% of the study population) agreed to take part. All cases of PAs were found following an exhaustive computer database search of agreed terms by the staff of each Practice and data on age, gender, presenting manifestations and their duration, imaging features at diagnosis, history of multiple endocrine neoplasia type 1 and family history of PA were collected. A total of 63 patients with PA were identified amongst the study population of 81,149, with a prevalence of 77.6 PA cases/100,000 inhabitants (prolactinomas; PRLoma: 44.4, nonfunctioning PAs: 22.2, acromegaly; ACRO: 8.6, corticotroph adenoma: 1.2 and unknown functional status; UFS: 1.2/100,000 inhabitants). The distribution of each PA subtype was for PRLoma 57%, nonfunctioning PAs 28%, ACRO 11%, corticotroph adenoma 2% and UFS 2%. The median age at diagnosis and the duration of symptoms until diagnosis (in years) were for PRLoma 32.0 and 1.5, nonfunctioning PAs 51.5 and 0.8, ACRO 47 and 4.5 and corticotroph adenoma 57 and 7, respectively. PRLoma was the most frequent PA diagnosed up to the age of 60 years (0-20 years: 75% and 20-60 years: 61% of PAs) and nonfunctioning PA after the age of 60 years (60% of PAs). Nonfunctioning PAs dominated in men (57% of all men with PA) and PRLoma in women (76% of all women with PA). Five patients (7.9%) presented with classical pituitary apoplexy, with a prevalence of 6.2 cases/100,000 inhabitants. Based on a well-defined population in Banbury (Oxfordshire, UK), we have shown that PAs have a fourfold increased prevalence than previously thought; our data confirm that PAs have a higher burden on the Health Care System and optimal resource distribution for both clinical care and research activities aiming to improve the outcome of these patients are needed.

Positional cloning of the gene for multiple endocrine neoplasia-type 1.