The impact of a new genus on the molecular phylogeny of Hemisphaeriini (Hemiptera, Fulgoromorpha, Issidae) 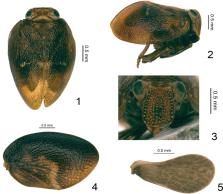 A new genus, Retaldar gen. nov. of the family Issidae ( Hemisphaeriinae , Hemisphaeriini ) is described from Guangxi Province of China. A revised molecular analysis for the Hemisphaeriini based on partial sequences of 18S, 28S, COXI and Cytb, provides evidence for a new lineage within the subtribe Mongolianina . With two subgroups of genera now identified, the monophyly of Mongolianina is discussed from both a morphological and a molecular basis.

Thierry Bourgoin,  Rong-Rong Wang,  Manfred Asche … (2014)
Following recent advances in the morphological interpretations of the tegmen basal cell margins in the Paraneoptera, a standardized and homology-driven groundplan terminology for tegmina types, structures and vein patterns in Hemiptera Fulgoromorpha, including fossils, is proposed. Each term is listed with a morphological definition, compared and linked to the main systems of planthopper forewing description that have been reviewed. The importance of a standardized and homology-driven terminology is stressed to enhance the quality of data in taxonomic descriptions and to strengthen phylogenetic morphological analysis results. When the interpretation of the origin of vein branches is render difficult, a three-step strategy for pattern recognition of the vein is proposed based on two principles: (1) vein forks are more informative than topology of the vein branches: a search for homologous areas, the nodal cells in particular, must first guide the recognition rather the number of branches of a vein, and (2) minimum of ad hoc evolutionary events should be invoked in the understanding of a modified vein pattern. Examples of some conflicting interpretations of venation patterns in planthoppers are discussed within different families for both extant and extinct taxa. For the first time, the concept of brachypterism is defined in a non-relative way independently from other structures, and the new one of hyperpterism is proposed; a reporting system is proposed for each of them.