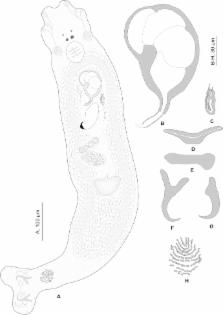 Pseudorhabdosynochus regius n. sp. is described from the gills of the mottled grouper Mycteroperca rubra caught off Senegal, Tunisia and Libya (type-locality: off Dakar, Senegal). The species is distinguished from its congeners by the structure of its sclerotised vagina (length 26–35 μm), which exhibits a trumpet in continuity with the primary canal, a straight primary canal, and primary and secondary chambers included in a common sclerotised mass along the primary canal. The species is also characterised by small squamodiscs (length 20–40 μm) with 10–11 rows of rodlets. Its closest relatives (based on the structure of the sclerotised vagina) are species mostly found in the Mediterranean Sea and parasites on species of Mycteroperca. A second species of Pseudorhabdosynochus Yamaguti, 1958 is reported from the same host and localities but not described. A list of diplectanids from groupers in the Mediterranean Sea is provided. We point out that a recent article was not compliant with the new Article 8.5.3 of the International Code of Zoological Nomenclature; for this reason, three species, P. nhatrangensis Dang, Bristow, Schander & Berland, 2013, P. vietnamensis Dang et al., 2013 and P. brunei Dang et al., 2013, are invalid.

Geoff Boxshall,  František Moravec,  Jean-Paul Trilles … (2010)
Abstract: Over a 7-year period, parasites have been collected from 28 species of groupers (Serranidae, Epinephelinae) in the waters off New Caledonia. Host-parasite and parasite-host lists are provided, with a total of 337 host-parasite combinations, including 146 parasite identifications at the species level. Results are included for isopods (5 species), copepods (19), monogeneans (56), digeneans (28), cestodes (12), and nematodes (12). When results are restricted to those 14 fish species for which more than five specimens were examined and to parasites identified at the species level, 109 host-parasite combinations were recorded, with 63 different species, of which monogeneans account for half (32 species), and an average of 4.5 parasite species per fish species. Digenean records were compared for 16 fish species shared with the study of Cribb et al. (2002); based on a total of 90 parasite records identified at the species level, New Caledonia has 17 new records and only seven species were already known from other locations. We hypothesize that the present results represent only a small part of the actual biodiversity, and we predict a biodiversity of 10 different parasite species and 30 host-parasite combinations per serranid. A comparison with a study on Heron Island (Queensland, Australia) by Lester and Sewell (1989) was attempted: of the four species of fish in common and in a total of 91 host-parasite combinations, only six parasites identified at the species level were shared. This suggests strongly that insufficient sampling impairs proper biogeographical or ecological comparisons. Probably only 3% of the parasite species of coral reef fish are already known in New Caledonia.

Parasite biodiversity in a coral reef fish: twelve species of monogeneans on the gills of the grouper Epinephelus maculatus (Perciformes: Serranidae) off New Caledonia, with a description of eight new species of Pseudorhabdosynochus (Monogenea: Diplectanidae).

Jean-Lou Justine (2007)
Coral reefs are known for their high level of biodiversity, but parasite biodiversity has not been evaluated. Cases such as Epinephelus maculatus, described here, show that the numerical estimation of parasite biodiversity in coral reefs could reach more than ten times the number of fish species; consequently, the extinction of certain fish species from endangered coral reefs would result in the co-extinction of at least ten times the number of parasite species. E. maculatus is a grouper of intermediate size (1-2 kg) and common in the coral reefs of New Caledonia, South Pacific. Based on the examination of more than 800 monogenean specimens, 12 species of monogeneans (ten diplectanids and two ancyrocephalids) were differentiated on the gills. These species of diplectanids have not been found in other epinephelines in the same area and thus are considered as specific to this host. In addition, three species of copepods, and isopod larvae, are present on the gills; E. maculatus thus has a total of 16 species of gill ectoparasites, which can be found together on a single individual fish. Diplectanids include Laticola dae Journo & Justine, 2006, which is the most abundant species representing about 50% of the specimens, and nine species which are rare, each representing 2-7% of the specimens: Diplectanum uitoe n. sp. and eight species of Pseudorhabdosynochus Yamaguti, 1958. D. uitoe, provisionally attributed to Diplectanum Diesing, 1858, is characterised by a small conical penis with internal walls. Pseudorhabdosynochus auitoe n. sp., P. buitoe n. sp., P. cuitoe n. sp., P. duitoe n. sp., P. euitoe n. sp. and P. fuitoe n. sp. are differentiated on the basis of the morphology of the sclerotised vagina, but are very similar in other characteristics; P. guitoe n. sp. is characterised by a quadriloculate organ with very thick walls and a very small sclerotised vagina; and P. huitoe n. sp. is characterised by its sclerotised vagina and by very long ventral and dorsal haptoral bars. Two rare (2-3% of specimens) ancyrocephalids, Haliotrema epinepheli Young, 1969 and Haliotrema sp., are briefly described in relation to the male copulatory organs and haptoral bars; H. epinepheli is apparently a generalist species found in various epinephelines and other fish species. A table of the 50 species of diplectanids (Pseudorhabdosynochus, Laticola Yang et al., 2006, Echinoplectanum Justine & Euzet, 2006 and Diplectanum) from serranids is provided.

Are all species of Pseudorhabdosynochus strictly host specific? A molecular study.

Charlotte Schoelinck,  Corinne Cruaud,  Jean-Lou Justine (2012)
Species of the diplectanid monogenean genus Pseudorhabdosynochus are strictly host-specific (specialist), with the exception of P. cyanopodus, which was reported in New Caledonia, South Pacific, from two host species, Epinephelus cyanopodus and E. chlorostigma. We sequenced the COI gene of both host fish species and of their monogeneans. Morphological identification and pairwise distances showed that the two fish species were distinct (difference 6.1-6.6%), but that their monogeneans were not (difference 0-1.5%). A morphological study of sclerotised parts showed that specimens of P. cyanopodus are similar in both fish. Most species of groupers and their associated Pseudorhabdosynochus species are from warm surface waters, but the two groupers E. cyanopodus and E. chlorostigma are usually caught in deep-sea on the outer slope of the coral reef. This suggests that acquisition of a less strict host specificity is an adaptation of P. cyanopodus to deep-sea hosts. Copyright Â© 2012 Elsevier Ireland Ltd. All rights reserved.